It was the week of upsets in men’s college soccer with conference favorites all falling to the wayside at home against underdogs.

Los Angeles, Calif. – Someone had to do it.

Washington went into Drake Stadium on Monday night and did something no other Pac-12 team has been able to do in the last 16 games – beat the UCLA Bruins. 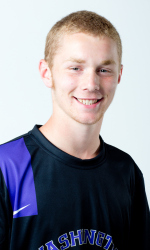 “We are a gutsy team,” Washington head coach Jamie Clark told TopDrawerSoccer.com. “We have a real tough and hard working team.”

The Huskies used goals from Nate Sackeyfio and Michael Gallagher to upset the Bruins 2-1.

“We survived the first half,” Clark added about the opening stanza that saw UCLA miss a few golden scoring chances. “[But] we were unlucky not to go up 3-0 in the second half.”

The win pushed the Huskies to second in conference standings, only two points behind the Bruins, which remain at the top of the leader board.

“They are an unbelievable team,” Clark said about UCLA. “The crazy part about this league is that it does not get any easier from here.”

The Huskies return to action on Friday with a home contest against California.

Virginia Tech transfer Beto Velasquez scored in the 31st minute and the #32 Matadors of Cal State Northridge(m) (9-4-0) upset the #9 Gauchos of UC Santa Barbara (8-1-3) on Sunday.

Velasquez provided the finish, but it was the collective defensive effort of the program from the Valley that really left the impact at Harder Stadium on Sunday. The Matadors have only let in two goals in their last eight games.

Redshirt senior and captain Joe Franco did exceptionally well at right back. The local kid could very well have played his way onto an MLS draft board with the performance.

The Matadors have a six-point lead at the top of the South Division in the Big West Conference while the Gauchos dropped to third in the North Division with the defeat.

UC Santa Barbara continues to replicate The Replacements with the amount of starters in street clothes on the sidelines. Head coach Tim Vom Steeg is hopeful Machael David will return to action this week against UC Davis (5-4-4).

Air Force suffered from the stereotypical let down following a big victory over the weekend.

On Friday, the Falcons went into Albuquerque and defeated the bullies of the MPSF, New Mexico. Caleb Downey scored the lone goal in the 94th minute.

The loss snapped two streaks for the Lobos. Prior to Downey’s overtime stunner, New Mexico had won 13-straight games at home. They had also gone 18 games without suffering a defeat.

The Falcons could not keep the momentum rolling and dropped a 3-2 result to Houston Baptist (3-5-1) on Sunday.

New Mexico was not the only ranked team in the MPSF to fall over the weekend. CSU Bakersfield had a nightmare of a showing in their home conference opener against San Jose State (5-4-1) on Friday.

Jonathan Salceda and Garret Foster scored within four minutes of each other to give the Spartans a 2-0 lead late in the second half. Roadrunners’ star Gyasi Zardes grabbed one back with four minutes left but Bakersfield could not find an equalizer in the dying moments.

San Jose State is the lone undefeated team in the MPSF and holds a one point advantage over CSU Bakersfield, which beat Seattle 4-3 on Sunday, in the Pacific Division. Zardes had two goals in the win over Seattle to push his season tally to seven.

SMU pushed its undefeated run to nine games with wins over Tulsa and Kentucky last week. The Mustangs beat the #35 Tulsa Hurricane (7-4-0) 1-0 on Wednesday then topped Kentucky 2-0 on Saturday to open Conference USA with a perfect 4-0-0 record.

The Mustangs have only let in one goal in conference play, which came in the opening fixture against South Carolina.