No. 3 Maryland rolls past No. 8 Louisville

Revenge was sweet for the Terrapins, winning 3-0 over a Louisville team that knocked them out of the NCAA Tournament in 2011.

“It's a great first win. I thought our team showed a tremendous amount of grit tonight against a very, very good Louisville team," head coach Sasho Cirovski told reporters after the game. "I thought we really worked hard and stayed connected throughout the game. Obviously we had some quality finishes tonight. We had contributions from everyone."

Freshman Schillo Tshuma opened up his college account in his very first game and looks good for a number of goals this season.

It wasn’t all bad news for the Cardinals, as midfielder Dylan Mares made a return and looked in good form after missing the entire 2011 season with an ACL injury. 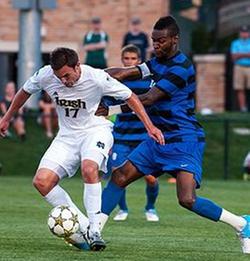 Much has been made about the experience of the Hoyas this fall, and it showed as Georgetown scraped by two wins over the past few days, a 2-1 win over No. 29 Virginia and a 1-0 defeat of No. 42 Florida Gulf Coast(m).

Forward Brandon Allen scored his first collegiate goal in just his second game, bagging a second half winner against FGCU.

“It's a good result for us and we're very happy with the outcome,” Wiese said after the win on Monday. “I don't think we started the game particularly well, but we got in the boy's head at halftime and reminded them what type of game we wanted to play. The second half was good and it was a special finish by the big fella there to win it."

In both games, the experienced senior core of Jimmy Nealis, Tommy Muller and Ian Christianson all played vital roles, as they will need to all season.

Notre Dame forward Ryan Finley, going up against his old Duke side, got one over his previous team over the weekend.

The senior, who transferred to the Irish ahead of the 2011 season, scored in the 76th minute to seal the 1-0 win. It was a well-deserved victory as the No. 20-ranked Irish outshot Duke 18-4 throughout the game, but were kept at bay by the excellent James Belshaw in goal.

"They had a fantastic goalkeeper today and he made some very good saves,” Notre Dame head coach Bobby Clark said after the game. “We shouldn't have been hanging on in the last minute because we should have put this game to bed really almost by halftime."

The No. 2 Huskies could only manage a single goal, besting St. Francis (NY) 1-0 thanks to a Mamadou Diouf goal from the penalty spot in the game’s first half.

It wasn’t for a lack of opportunities, of course, as Connecticut launched 16 shots on goal as opposed to just three for their opponents. UConn goalkeeper Andre Blake, who had 15 shutouts last season, picked up another one, making just a single save.

Despite facing some inclement weather in its two games over the weekend, the Hawks opened up the season in proper fashion with two wins in two games, a 1-0 defeat of Towson and a 3-1 win against Providence.

Junior midfielder Paco Navarro, a transfer from the NAIA, scored two goals and added an assist in the second game as well, as the always-steady Hawks started off strong.

Traveling to Missouri for the Saint Louis Tournament, the No. 10 Hoosiers swept past the opposition, beating Saint Louis 2-1 and breezing by Cincinnati 3-0 on Sunday.

“We are very pleased to come in here and leave 2-0,” head coach Todd Yeagley said after the second game. “I liked our response in the second half. We had a lot of the ball the entire game but I thought our energy and running was not sharp enough in the first half. When we started to break them down in the second half we started to see more dynamic ball movement."

Forward Eriq Zavaleta was the star of the weekend, scoring three goals in all, two against the Bearcats, leading Indiana to its strong start (for which he was named the TopDrawerSoccer.com Player of the Week). The Hoosiers welcome Clemson and San Diego State to Bloomington this weekend.

It took longer than perhaps they would have liked, but No. 27 Charlotte picked up two wins in two double overtime games, beating Denver 2-1, and following that up with a 1-0 win against Coastal Carolina on Monday.

"Incredible that this was our second double overtime game in a 48 hour period," Charlotte coach Kevin Langan said after Monday’s game. "I was proud of our effort and desire to win tonight."

Thomas Allen provide the game winner on Monday against Coastal Carolina in the 102nd minute, while Aidan Kirkbride scored both goals in the win against Denver.