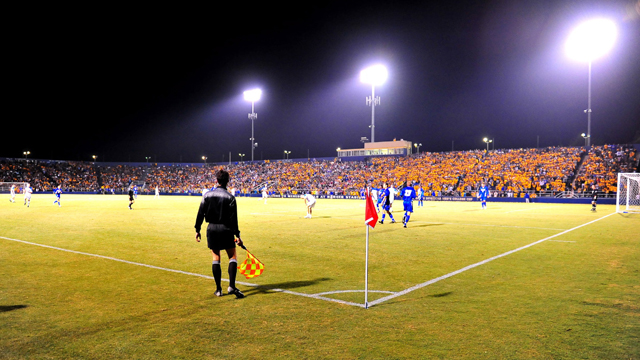 It’s a big rivalry week in men’s college soccer. ACC play is revving up so some old foes square off. On the opposite coast, the biggest rivalry in California happens on Saturday.

Below is a breakdown of the five games to watch from the fourth weekend of the college soccer season.

Harder Stadium always glistens under the bright lights of the television camera. The square down between California rivals should attract a healthy crowd to the on-campus stadium. UCLA enters the tilt with a sputtering offense and a lot of confusion. The Bruins have a stacked roster, but haven’t found a way to break down teams that put numbers behind the ball. That might not be a problem on Saturday though. The Gauchos are not known for playing conservatively and it’s difficult to imagine head coach Tim Vom Steeg trying to park the bus on national television with prospective recruits watching. The Gauchos will try to attack UCLA in the heart of the defense through the feet of freshman sensation Ludwig Ahl, who has been everything and more he was billed up to be prior to his arrival in Isla Vista. UCLA center backs Michael Amick and Edgar Contreras will have a tough time stopping the Swedish maestro who is cunning and dynamic with the ball on his feet. His partnership with potential MLS target Ismaila Jome is a work in progress, but it has improved with each passing week. On the end side, the Bruins attack led by Larry Ndjock and Leo Stolz will test a relatively inexperienced UCSB defense that hasn’t held up well against physical forwards. Bruins freshman forward Abu Danladi missed both of the games last week, which is of slight concern. Bruins staff has been quiet about his availability, but the Gatorade Player of the Year could be the difference maker if he is available on Saturday.

ACC rivals, College Cup foes, however you want to bill this game, it should be good. Two of the best midfielders in the country are set to battle with Nick Besler looking into the eyes of the beast of the Cavaliers attack in Eric Bird. While Besler has helped anchor a defense that only let in three goals, the Notre Dame has yet to really get clicking. The Irish have just seven goals in five games, which might be part of the quality of opponent and the difficulty of replacing the wizard Harrison Shipp. Virginia has gone through the struggles as well. Forward Darius Madison is just now working his way back into the lineup as the sputtering Virginia attack needs new life after only five goals in five games. This is likely going to be a close tilt with little to separate these rivals.

Delaware takes it perfect record on the road this weekend for games against California and Stanford(m). Sophomore stud Guillermo Delgado who has six goals already this season leads the bountiful Blue Hens. California’s defense will be tested on Friday. Joshua Morton and Trevor Haberkorn have locked down the center back spots for the Golden Bears. The duo has only allowed 22 shots on goal through the first four games of the season. Cal’s offense has been razor sharp through the opening weeks. Redshirt freshman Jose Carrera-Garcia has stepped into an attacking midfield role and brought a new dynamic to Kevin Grimes’ side. Connor Hallisey and Stefano Bonomo continued to build off a successful 2013 with the two combining for 20 points so far in 2014. This game could turn into a shootout with the amount of talented players on the field. Cal and Delaware are currently tied for second in scoring offense in Division I as both programs average three goals per game.

Offense isn’t your thing? You prefer the play of stellar defense and amazing goalkeepers. Well, grab a ticket for Penn State against Ohio State on Sunday. Penn State goalkeeper Andrew Wolverton, aka Golden Giant, has yet to let in a goal this season. That’s 413 minutes of shutout play. Alex Ivanov has been very good for Ohio State in goal this season. The senior has only let in three goals in 512 minutes of play. If someone is going to score, Ohio State’s Danny Jensen figures to be a likely figure in helping the Buckeyes break through. Jensen is a speedster and great on the counter. Penn State redshirt senior Mikey Minutillo has been a joy to watch this season after returning from injury. He is the likely candidate to fool the Ohio State backline and sneak one in the back of the net.

The Carolina-Duke rivalry is one of the best in college sports. Simply looking at the records of these teams gives the clear hat tip to North Carolina heading into the tilt. However, Duke is undefeated at home and clearly plays better in its friendly confines, which should make the Friday showdown a close affair. Duke is relying on a freshman heavy squad that is great on the counter. North Carolina is the old team with experienced players all over the field. The Tar Heels are going to try to grind out a result against their rivals and keep that potent attack at bay.