Many west coast programs used the second week of the season to take on ambitious road trips. UCLA and Cal made the journey to the opposite coast for clashes against ACC powerhouses, while Stanford suffered through a pair of defeats in the College of Charleston Tournament.

However, there still were some games near the Pacific over the weekend and even one high profile fixture in Nebraska.

Senior Andrew Ribeiro showed off his versatility in filling in for nearly every field position and helped the Jays to a 1-1 draw against Akron on Friday and a 3-0 win over Rutgers on Sunday.

The four points (plus an edge over the Zips in goal differential tiebreaker) were enough for the Jays to win the Ameritas Classic Championship. Ribeiro was awarded the MVP award for the tournament.

The Jays now hit the road for a tournament in the Bay Area against Santa Clara on Friday and Saint Mary’s on Sunday.

Redshirt freshman Christian Blandon also made a big splash over the weekend with a goal and an assist in his second career game.The preseason concerns about finding a finisher for Creighton have been quieted somewhat with junior college transfer Sean Kim scoring three goals in his first three games.

While the Jays escaped with a point on Friday, Akron was crying foul after an offside flag denied the Zips a goal in overtime. Replays showed the Akron player was clearly onside and the assistant referee made an incorrect decision, but a point in Morrison Stadium is nothing to sneeze at for a young group of talented players.

Also, in a sign of maturity, the Zips did not let the decision cloud the weekend either with a 2-1 win over SIUE on Sunday. Caleb Porter’s group improved to 2-0-1 on the season. 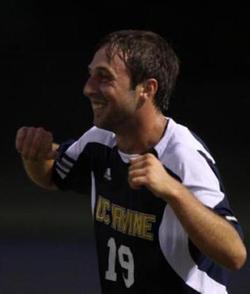 A showdown with Porter’s old program, Indiana, waits on Friday.

UCSB head coach Tim Vom Steeg told TopDrawerSoccer.com before the season that he believed in this team from the first to the last player.

Well, after suffering through a handful of injuries, Vom Steeg might need to start looking at that last player to pick up some minutes this weekend against Valparaiso.

Star center midfielder Fifi Baiden suffered an injury in the 2-2 draw against Oregon State on Friday, which required him to miss Sunday’s contest against Gonzaga. Senior captain Peter McGlynn left the 3-0 win against the Zags in the opening minute due to a head injury.

Added to those recent blows, goalkeeper Austin Mansker is playing with a mask on due to breaking his nose in practice during the first week of the season.

The Gauchos training staff is working overtime just to keep up with the walking wounded on the field.

Twelve goals in three games will have many coaches in the Pac 12 taking notice of Oregon State’s early season success.

The Beavers attack has enjoyed the contributions of a number of players with sophomore forward Khiry Shelton headlining the push with seven points (3 goals, 1 assist) in three games.

“Khiry holds himself to a high standard,” head coach Steve Simmons said after Sunday’s 6-0 win over Manhattan. “The other people around him are also dangerous and they complement each other. They all benefit from each other’s work.”

The conservative approach of Notre Dame and Indiana will put the Oregon State attack to the test this weekend.

Shelton and company exposed the Gauchos transition defense in the 2-2 draw on Friday, but those opportunities will be limited against the Indiana programs.

After a 3-2 win over Wisconsin on Friday and a 0-0 draw against CSU Bakersfield on Sunday, the Washington Huskies enter Friday’s nationally televised contest against Connecticut with a growing sense of confidence.

Jamie Clark’s squad will need any edge it can get over the Huskies from the opposite coast. Storrs is a difficult place to play, and UCONN (3-0-0) has only let in one goal this season.

Gyasi Zardes slow out of the gate (and now injured)

With only one goal in three games, the Roadrunners offense in not clicking at the high-level that was expected prior to the season. Part of it is a tough schedule, but the other part is the opposition keying in on Zardes.

As the lone striker in the formation, Zardes has been crowded by as many as four defenders at times and had little room to operate. On Sunday, Zardes was slowed even more when he left the 0-0 draw against Washington with an injury.

CSU Bakersfield (0-1-2) needs another striker to step up and take some pressure off Zardes to help facilitate a more dynamic attack.

UC Irvine notched wins over LIU Brooklyn(m) and Detroit last weekend to improve to 3-0-0 on the season. The Anteaters face a big challenge this week though with Stanford visiting on Friday and then a trip up the 405 freeway on Sunday for a showdown with UCLA.

Junior college transfer Gor Kirakosyan has been the relevation of the season with three goals in his first three games. The midfielder collected Big West Player of the Week honors.

Tulsa claimed a 2-1 win over the Lobos on Friday and ended New Mexico’s undefeated run.

Prior to the loss, the Lobos last suffered defeat in 2010 after running the table last season but falling out of the tournament in a penalty kick defeat to South Florida.

The Lobos bounced back on Sunday with a 3-1 win over SMU. Unsurprisingly, senior goalkeeper Victor Rodriguez returned to his starting position after serving his two-game suspension. Rodriguez had two saves in the win.

South Florida, coincidentally, ended up winning the four team event over the weekend with a pair of victories over SMU and Tulsa. Ben Sweat had the lone strike against SMU, while Lucas Baldin notched the game-winner in a 2-1 victory over Tulsa.

Head coach George Kiefer was obviously pleased with the team, but singled out the performance of Roberto Alterio in the Tulsa game.

“If he can keep with it, I think he’s on his way to learning how to become a good pro,” Kiefer said after the game. “I’m very pleased for him.”