Another weekend of wonderful college soccer action has come and gone, and TopDrawerSoccer.com is here to recap some of the biggest games from the schedule.

Before diving into the recap, take a gander at the update Tournament Ranking and the Player of the Week honors.

Eighteen wins in a row

The Jays finished a road trip to California over the weekend with 1-0 wins over Saint Mary’s (1-1-2) and Santa Clara (1-4), which pushed one of the weirder streaks in college soccer to 18 games.

The #4 Creighton Bluejays are undefeated in their last 18 games against California teams. The bad news is Saint Mary’s clash on Sunday was the last California team on the Jays schedule for this season. 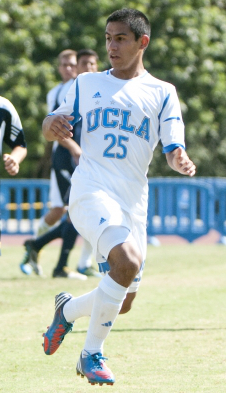 Elmar Bolowich’s squad is back at Morrison Stadium this weekend with the Creighton Invitational, which includes games against #21 Old Dominion (4-0-0) and William & Mary (1-2-1).

The undefeated Monarchs will be offer a unique test for the Jays, but the physically demanding defensive effort will probably be too much for the visitors. Jays’ Bruno Castro looked to be back in the rotation after an injury derailed his start to the season. With Castro and Jose Gomez on the field, the Jays will finally have the offense clicking this weekend.

UC Santa Barbara (3-0-1) finally had its home opener on Friday against Valparaiso (1-2-0) in what was expected to be a one-sided affair. Valparaiso had other ideas.

The visitors from the Horizon League displayed a staunch defense and had the #6 Gauchos on their heels in the first half. UCSB rebounded in the second half around Nic Ryan and Achille Campion who both netted their third goals of the season to give the home side a 2-1 win.

This weekend’s slate figures to test Tim Vom Steeg’s group once again, as UCSB travels to San Diego (2-2-0) on Friday then heads north to play Seattle (1-3-0) on Sunday. Despite the records of the two opponents, that is a difficult two-game stretch for a team that has a number of players dealing with minor injuries. Center back Peter Schmetz is expected to return to the lineup on Friday after sitting out last week’s game with a hip injury.

According to popular belief, Lobos live in a lair. No idea if that is accurate, but I do know New Mexico’s home field is one of the most difficult places in the nation to play a soccer game.

The #7 Lobos opened the season on the road, but finally returned home on Friday with a 2-0 win over UAB. The UAB game was the start of an eight game stretch with seven at home for New Mexico.

The cherry on top for the Mountain Pacific Sports Federation favorites is the return of U.S. U20 Men’s National Team midfielder James Rogers, who is back in the lineup after serving his suspension. Rogers scored the second goal against UAB in his first game back.

David Estrada, the current Seattle Sounders forward, was an offensive fireplug in his first season with UCLA where he scored 12 goals in 2006 before cooling down over the next three years to finish with 22 goals in his collegiate career.

There is another Estrada in Westwood now, younger brother, Max, who is off to a red-hot start with two goals in his first four games (all substitute appearances).  Max, who is a junior college transfer, has been incredibly efficient in front of the net with two game-winning goals from his three shots.

The Bruins have to be crossing their fingers that history repeats with the Estrada family, as no consistent scorer has emerged yet from UCLA’s stable of highly regarded recruits.

Finally in the Win Column

The #22 Roadrunners of CSU Bakersfield (1-1-3) picked up their first win of the season on Monday with a 2-1 victory over Fullerton. Star forward Gyasi Zardes sat out the game, as he is dealing with an injury. It was the second game Zardes has missed this season.

“We are an attacking team, but I think what the worrying thing is that while it is still 1-0, they just make one break and it's 1-1 and then the momentum is gone,” Tobin said. “So although we do love to attack, we have to be a little more careful on that counter attack.”

Denver transfer Christian Volesky is fitting in quite well with his new squad, the #38 SIUE (5-1-0) Cougars. Volesky has three goals to lead the Cougars in scoring in the early stage of the season.

SIUE is in for a test this weekend though with a clash against Indiana on the road on Friday. The Hoosiers have been sharp offensively to start the season with 11 goals in six games, so the Cougars defense will definitely be tested.