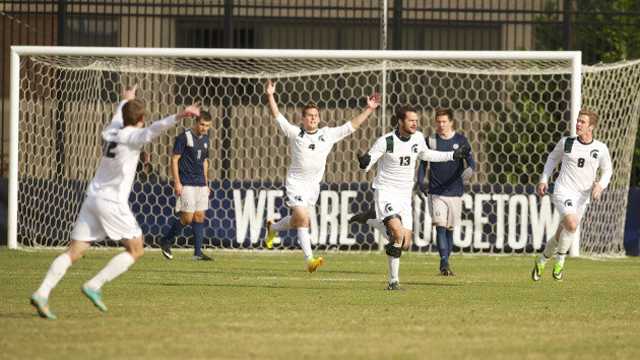 Connecticut kept its Cinderella run in the postseason alive on Sunday with a penalty kick victory over UCLA after a 3-3 draw in regulation and overtime. The Bruins, the No. 1 overall seed in the NCAA Tournament, jumped out to a 2-0 lead, but the Huskies fought back thanks to two goals from freshman star Cyle Larin. Goalkeeper Andre Blake made the clinching save in the sixth round of the penalty kick shootout. UConn, No. 6 in this week’s TDS Top 25, moves on to face Virginia, No. 5 in the TDs Top 25, in the Elite Eight on Friday.

Washington made history on Sunday. The 2013 Pac-12 champions advanced to the Elite Eight for the first time in program history. The Huskies retain the top spot in the TDS Top 25 heading into an Elite Eight showdown with No. 7 New Mexico, which defeated No. 14 Penn State 2-0 on Sunday to book its place in the quarterfinals. The Lobos’ stout defense , once again, helped the Conference USA program prevail at home.

The Huskies were not the only program to enjoy a historic victory on Sunday. Michigan State went on the road and defeated Georgetown 1-0 behind a goal from Adam Montague. The junior’s tally sent the Spartans to the Elite Eight for the first time since 1968. Damon Rensing’s squad checks in at No. 8 this week in the TDS Top 25. The lone Big Ten representative remaining takes on No. 3 Notre Dame in the next round. Notre Dame bounced back from an early deficit against No. 12 Wake Forest on Sunday on the way to a 4-2 win.

Georgetown’s exit means that Maryland is the only team with a chance to repeat as a College Cup participant in 2013. The Terps defeated a spunky UC Irvine side 1-0 on Sunday to move one step closer to a trip to Philadelphia. Maryland takes over the No. 2 spot in the TDS Top 25 thanks to UCLA’s early exit from the competition.