While it may just be the second weekend in the men’s game, there are mouth-watering matchups all across the country.

Down in Chapel Hill, all eyes will once again be on the defending champions as #1 North Carolina welcomes #18 West Virginia to town. The visitors have high aspirations for this season and opened the season with two wins – it’ll be a tough test for both sides, as UNC continues to reshuffle and rebuild last year’s title-winning squad.

Labor Day weekend doesn’t get any easier for the Mountaineers either, as they’ll swing by and take on #33 Wake Forest on Sunday. The Demon Deacons also get a chance against Boston University the preceding Friday. 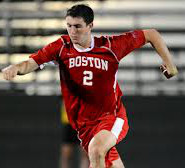 After opening up the season with a loss on the road, #9 Duke begins their home slate against #34 Santa Clara. It’ll be a stiff test for the Blue Devils as they continue to cope without all-around talent Andrew Wenger.Another side faced with a difficult road trip is #7 UC Santa Barbara. They’ll head to the Pacific Northwest to take on Oregon State on Friday, wrapping up the weekend against Gonzaga.

Two programs are amongst those making cross-country trips to go up against quality opposition. And perhaps fewer has more at stake than #16 UCLA, traveling to take on #3 Maryland and Virginia. The Bruins started off with a 3-2 loss against New Mexico last weekend, and if they can’t straighten the ship than it could be an 0-3 start for last year’s College Cup semifinalist.

While it’s too early to heap praise on either team, whatever side wins this one will have sent a message to the rest of the nation.

1. In the women’s game, West Virginia was able to shock a #1 ranked team when they upset Stanford last weekend. Can the men do the same thing against North Carolina?

2. Does Will Bates return? The Virginia forward, one of the most fearsome strikers in the nation, sat out last weekend’s loss against Georgetown with a bone bruise. If he can make his return for big matchups against California and UCLA, it’ll be a good sign for both his team and his pro aspirations.

3. The Caleb Porter to MLS news is likely to impact the Zips in some fashion – but game-to-game will be the most fascinating, as it could be the extra incentive Akron needs to push themselves to another title. Or it could be a major distraction that sidetracks this season.