The Atlantic Coast Conference, renowned as the toughest conference in the nation, opens up play this weekend with a handful of contests including a road trip for preseason favorites Maryland.

The programs of the ACC are not the only teams in action and games all over the country are highlighted in this week’s men’s college soccer weekend preview.

The defending national champions North Carolina (3-0-0)keep the top spot in the rankings after another undefeated weekend. This week, the #1 Tar Heels open up conference play with a game at home against Virginia Tech (3-1-0) on Saturday. 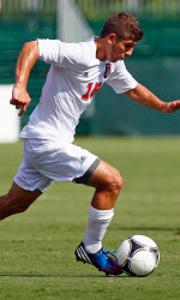 This game should be closer than many expect though. The Hokies have been solid defensively since the opening week loss including zero goals conceded in the second half. The Tar Heels have been slow out of the gate this season with only two goals in the first half of the seven scored this year. If the Hokies can keep the Tar Heel offense frustrated in the first half, there could be a minor upset brewing. This game will be broadcast live on ESPN3 at 7:00 p.m. (ET).

Up the coast, #2 Connecticut (3-0-0) welcomes #27 Washington (3-0-1) into town on Friday for a national showdown on Fox Soccer Channel. UCONN has been playing with fire to start the season with three one-goal victories. Washington is the most complete team that UCONN has faced and will force senior midfielder Carlos Alvarez to really force the issue in breaking down the defense.

In another important ACC showdown from the weekend, #3 Maryland (2-0-1) travels up to Massachusetts for a clash against #25 Boston College (2-1-0) on Friday.

It has been seven years since the last time the Terps won an away game against Boston College. That 2005 team also went on to win the national championship.

Despite the media circus surrounding head coach Caleb Porter’s impending exit, the #4 Akron Zips (2-0-1) continue to impress fans with their style of play and quality opposition.

Hoosiers’ striker Eriq Zavaleta should make this an interesting test for the Zips. The former U.S. U17 Men’s National Team standout is clinical in front of the net.

The Wolfpack of NC State (4-0-0) is off to a dream start. Head coach Kelley Findley’s group is clicking offensively with 12 goals in the first four games and shutting down opponents defensively with only two goals conceded.

After the 3-2 loss to New Mexico, UCLA head coach Jorge Salcedo said that his players needed that type of game to be successful this season. He has a young roster again this year, and those types of games make players mature quickly.

The Bruins showed their newfound maturity with a 2-2 draw against Maryland and a 1-0 overtime win over Virginia. Now, the Boys of Westwood are back in the friendly confines of Drake stadium to host Tulsa and UC Irvine this weekend.

In what will likely be a physical battle against the Anteaters, the Bruins should key the defense on slowing down Irvine’s Gor Kirakosyan. The junior college transfer sat out Irvine’s last game with a leg injury but is expected to be ready to go this weekend.

Now it gets tough for Evansville (3-0-0). No knock on the early season opponents for the Purple Aces, but Evansville, starting on Friday, enters a pretty tricky set of games. First up is Portland, which looks like a completely different squad from the one that suffered a 0-4 loss to Cal State Northridge to start the season.

Are the Wake Forest freshmen ready for a road game? The Deacs upcoming schedule is at Clemson, at Louisville, and at North Carolina. That stretch of three games will really put the talented trio of Jalen Robinson, Michael Gamble, and Colin Martin to the test.

Attendance! Both UC Santa Barbara and New Mexico have their first home game of the season this weekend, which should draw big crowds. Also, Connecticut will be packing its stadium for the Friday night game on Fox Soccer Channel.