Due to television scheduling, the game of the week likely won’t happen this weekend as UCLA battles Washington on Monday on the Pac-12 Network in another top ten showdown for the conference.

It opens the door for the ACC to showcase another game of the week as well as the Big East grabbing some of the spotlight. 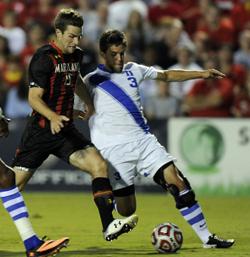 If you tuned into the Game of the Week last week, which featured Maryland and Virginia, you were not disappointed. The two squads combined for six goals in a thriller from the opening whistle.

This week, Maryland faces another ACC foe that has the potential to test the inexperienced Terps defense. Wake Forest is fresh off a 1-0 loss to Akron during the midweek game and now faces a tough challenge of going into College Park and trying to grab a result.

Maryland is 5-1-1 at home with a plus-10 goal differential. Highly-touted striker Patrick Mullins is on a hot streak with five goals and one assist in the last three games. Slowing him down will be the key to Wake Forest pulling off the upset on the road and keeping its undefeated conference record alive.

No. 5 Louisville vs. No. 25 Connecticut, NSCAAtv – UCONN goalkeeper sensation Andre Blake returned to the lineup for the Huskies this week, and it was just in time for the AAC showdown with the Cardinals. Louisville is fresh off a 3-0 victory over Indiana, which ran its unbeaten run to eight games. The Cardinals have been dominant over that stretch with only three goals conceded.

Providence vs. No. 20 Marquette – The Golden Eagles are rolling along right now in Big East following wins over Creighton and Butler. Marquette hits the road this week for a game against Providence on Saturday and St. John’s on Wednesday. Keep an eye on Marquette redshirt sophomore C. Nortey who has four game-winning goals in four Big East games this season.

No. 1 California vs. Stanford – On paper, this seems like a game that California could overlook. The Bears just beat UCLA on the road and are facing an injury depleted Stanford side. However, history has a way of leaving a mark and after Stanford creamed Cal last year 6-1 in the final game of the season for both teams, the thought of revenge is not far from the minds of Cal players.

No. 14 Michigan State vs. No. 23 Penn State – Senior center back and former PDL Defender of the Year Kevin Cope is back in action for the Spartans after messing a significant chunk of the season due to injury. His return has been seamless and the Spartans are unbeaten in their last seven.