The conference races quickly heat up in college soccer where one bad weekend can send a team quickly into the cellar. This weekend features highly anticipated matchups from coast to coast in the men’s game with postseason implications already starting to linger.

Below is a breakdown of some of the top games from the second weekend of October in men’s college soccer. 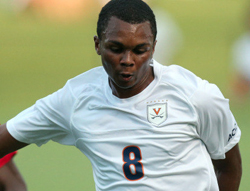 The best game of the week from the ACC should be a high-scoring affair.

Maryland’s youthful defense has been prone to coughing up chances, especially against quick forwards (see Stanford Zach Batteer). Virginia is full of speed and skill in the attack with freshmen Jordan Allen and Riggs Lennon coming into their own as well as junior midfielder Eric Bird dropping bombs from distance. Not to mention speedster Darius Madison on the wing who has three goals and two assists this season.

The Cavaliers have sharpened up defensively over the past few weeks with only one goal conceded in the last four games. Creighton transfer Jeff Gal has 22 saves on the season, but he is facing arguably his most difficult challenge to date against Patrick Mullins and the Terps on Friday.

Mullins and the Terps had moments of really good play on Tuesday against a stout and experienced Notre Dame side. The Terps came away with a 1-1 draw, but there were plenty of chances for Maryland to add a second during the double overtime clash.

Friday’s meeting should feature end-to-end action with both teams fully capable of quickly finding the back of the net. Maryland’s Zackary Steffen and Gal might be busy, and it could fall on them to who wins this one in Charlottesville.

TV Game of the Week:

The top ranked Golden Bears head to Southern California this week for games against San Diego State and UCLA. The Bruins are undefeated in their last three, which includes an impressive win over Cal State Northridge(m).

California is coming off a 1-1 draw against Washington where the Bears played well for about 30 minutes to start the game, but then lost hold of the blue print and fell into Washington’s style of play.

The same could be the case on Sunday if UCLA grabs hold of the possession early and opens up the Cal defense via the talented attacking duo of Victor Munoz and Leo Stolz.

Cal is going to find most of its success on set pieces as the Golden Bears have thrived off of the services of Connor Hallisey and Seth Casiple this season. Center back Steve Birnbaum is a menace in the air and definitely going to be the focal point of the UCLA scouting report.

Cal State Northridge(m) vs. Cal Poly – There is plenty to love about the Big West this season and these two programs are a major reason why. They both want the ball and they both want to play an attacking, possession-dominant style. Expect the fireworks to be early and often in Northridge. Prediction: 3-2 CSUN

Louisville vs. Rutgers – The Cardinals are undefeated in their last six games, and Rutgers is in the same conference. Beyond a questionable scoreless draw against Ohio State, Louisville has been playing some of the best soccer in the country lately and well worth a watch. Prediction: 2-0 Louisville.

Marquette vs. Creighton – The newly renovated Valley Fields got their first taste of action on Wednesday with a game against Butler, but Saturday’s showdown against highly ranked Creighton may be the real grand opening. Prediction: 1-0 Creighton.

Wake Forest vs. Clemson – The Tigers hit the road where they have actually been pretty good this year 2-0-1 for an ACC clash against the Demon Deacons. Wake Forest is good for some goals (only been shut out in two games this season), which makes this the good consolation to watch in case Virginia-Maryland isn’t an option. Prediction: 2-1 Wake Forest.

Old Dominion vs. UAB – Old Dominion is trying to rebound this week after a pretty disappointing loss to Kentucky. The Monarchs host UAB on Saturday in a Conference USA showdown that is meaningful to both sides. Prediction: 3-1 UAB