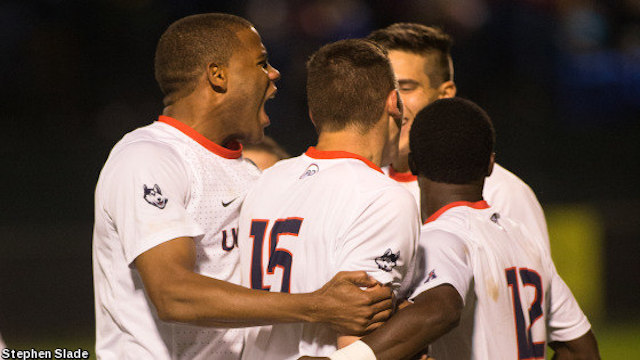 This massive legacy conference had plenty of depth in 2014. Eight of the league’s 13 teams finished with conference marks of at least .500, and the A-10 put five players in January’s MLS SuperDraft. The Billikens accounted for a whopping four of those, tying North Carolina for the most players taken from any one school. Impressive, and then you realize what Saint Louis has to replace. A bit more daunting.

Striker Robert Kristo was far and away the league’s most dangerous scoring threat in 2014, and his departure leaves a yawning chasm in that spot for the Billikens. And that’s not to mention the loss of defensive anchor Anthony Manning as well. Saint Louis has enough back - including defending mid of the year David Graydon - to make another run at the top of the conference. But the gap has closed.

Rhode Island was the story of the A-10 last year. While George Mason and the Billikens swallowed most of the preseason hype, Rhody had the conference’s best record and were ignominiously snubbed from the NCAA tourney despite a 13-win season. Rhode Island will be stout at the back again thanks to the return of Nils Leifhelm, who emerged as one of the nation’s best keepers in 2014. Can they prove 2014 wasn’t a one-off event?

They’ll have plenty of competition at the top. George Mason and VCU both return a fair amount of fire power after quality seasons last year, while Davidson also looks poised to carry over some momentum from 2014. VCU and Davidson shared the conference’s stingiest defense honor last year, and VCU in particular looks reloaded at the back with Dennis Castillo and Juan Fajardo Ortiz back for another go. Mason is similarly reloaded on defense, and both should carry their sides to challenges for the league title.

Further down the line, the logjam in the middle of the pack should break up a bit in 2015. Duquesne, La Salle, Dayton and Fordham were basically tethered to one another last season, so we’ll see which can separate from the pack. Fordham’s Andres Penfold is a game-changer up top, Dayton’s Amass Amankona is a brutal scoring weapon, La Salle’s Joe Farrell is among the steadiest metronomes in the conference and Duquesne scored more goals per game than any team in the league last year. Strap in, should be a bumpy ride in 2015.

The AAC was one of the most stridently split conferences in the nation last year between the upper and lower halves. Connecticut, Tulsa, SMU and South Florida largely had the run of the place while the bottom four did their best to scramble and keep up. And if ever there was a year for the up-and-comers to close the gap, it’s now.

UConn, as usual, was the cream of the crop in the AAC last year, but the Huskies were absolutely decimated by departures in the offseason. DPOY Sergio Campbell and MOY Adria Marco Beso both graduated, and Cyle Larin, who’s become the best rookie in MLS history with Orlando City, was arguably the nation’s best college forward in 2014. It isn't as though the Huskies have bupkis to work with - Jacob Nerwinski is quality in the middle, and Cheikh Stephane Coly is a danger running from deep - but this won’t be the same well-oiled machine it was in 2014.

As far as talent is concerned, it’s probably a dead heat atop the league with UConn, Tulsa and South Florida. Tulsa narrowly finished second in the league last year, and the return of preseason defender of the year Bradley Bourgeois, in addition to others like Ray Saari, makes this team a definite challenger. South Florida boasts the league’s top keeper in Stefanovic, and the midfield/forward combo of Lindo Mfeka and Eduaro Maceira is one of the most fun to watch in the conference.

Of the teams in the league’s bottom four last year, Cincinnati might be the most intriguing. John Manga might be the single most explosive talent in the entire league, and he looks poised to step into the void Cyle Larin left behind. He finished with 22 points last season, but he needed more help. If the Bearcats can surround him with more firepower this season - and a quality recruiting class indicates they’re on that road - there’s no reason this team can’t finish above .500 this season.

SMU seems to be a perennial sleeping giant these days. After a sustained period of national success, the Mustangs have been down in recent years, but talent continues to find its way to the biggest DI men’s soccer program in Texas. Jordan Cano is one of the league’s top defenders, and Idi Camara is a danger to score every time he touches the ball. if John Lujano can be the connective tissue in the middle this team needs, the Mustangs can finally begin restoring some nationally-renowned luster to the program.