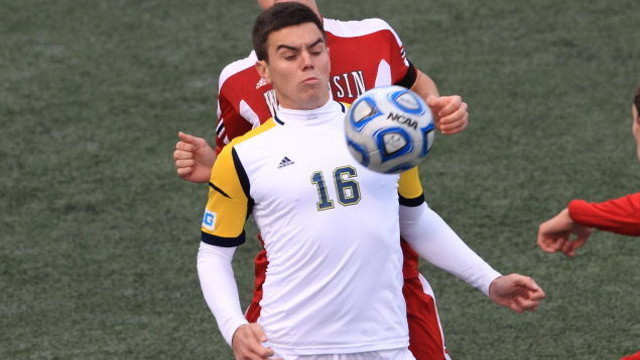 An own goal in double overtime lifted Maryland to the final. Watch the postgame interview with Maryland head coach Sasho Cirovski.

After 110 minutes of scoreless play, UNC’s Scott Goodwin made the vital save of a spot kick, and Jordan Gafa converted the penalty.

Greg Ranjitsing came up big in goal with a pair of saves and Carl-Oscar Andersson scored the decisive post-match spot kick for the Bears. The match was scoreless before Franck Doumbe put ETSU up with a 75th minute goal, but Mercer’s Kristoffer Ibsen equalized a few minutes later.

Felipe DeSousa scored an overtime winner on an assist from Santiago Echeverri.  Federico Crespo had put FGCU on top in the opening half, but Omar Djabi forced overtime with a 77th minute goal for Lipscomb.

Kingsley Bryce scored an 81st minute winner for the Billikens, who also got a shutout in goal from Nick Shackelford.

Brandon Allen scored in the closing minute of double overtime to lift the Hoyas into the final. Steve Neumann scored the opener for Georgetown, with Adam Lysak equalizing for the Golden Eagles in the 2nd half.

Dillon Powers scored a 1st half winner for the Fighting Irish.

The Chanticleers went up 2-0 at halftime behind goals from Pedro Ribeiro and Ricky  Garbanzo. High Point pulled a goal back via Mamadee Nyepon, but Coastal held on and advanced to the final.

Alex Isern scored an overtime winner to defeat the top-seeded Highlanders. Isern had tied the score in the 1st half after Radford’s Bernardo Ulmo put his team on top early.

Cody Henderson, Adam Montague and Jay Chapman scored for the Spartans before Minh Vu got a late consolation goal for the regular season champion Nittany Lions.

Tyler Arnone, T.J. Roehn and Etienne Lussiez found the net for the Wolverines, who got a shutout in goal by Adam Grinwin.

Don Anding and Conner Alexander each scored twice for the Huskies, with Donovan Fayd adding another goal. Oliver Blum got the shutout in goal.

Adam Janowski was the post-match penalty kick hero for the Pride. Maid Memic scored for Hofstra in regulation , with Fabio Machado the goalscorer for Drexel.

SMU goalkeeper Jaime Ibarra came up big in post-match spot kicks, with Michael King converting the decisive penalty. Cameron Wilder put the Wildcats up in the early going, but Andrew Morales tied it up in the 27th  minute for SMU. Gabriel Conelian scored to give UK a 2-1 lead before Juan Castillo again equalized for the Mustangs.

Admir Suljevic scored the winner and Brad Stuver recorded a shutout in goal for the Vikings.

Peter McKeown recorded a shutout in goal and Nick Sanchez scored a 53rd minute winner on a cross from Brian Bement for the Ramblers.

Jayson Leseth scored in the 1st half to defeat the Mountaineers. Jordan Godsey earned the shutout I goal for the Huskies.

Wil Trapp and Thomas Schmitt scored for the Zips, who got another shutout in goal from David Meves. MAC Player of the Year Scott Caldwell delivered 2 assists.

Vincent Keller scored the winner in double overtime, on assists from Eric Miller and Brent Kallman. Brian Grand gave Drake a halftime lead, but Jose Gomez and Miller struck to put Creighton up 2-1 in the 2nd half, before Michael Thaden drew Drake level again with a 60th minute goal.

Kevin Stoll and Aaron Lantz scored for the Cougars, and John Berner supplied a shutout in goal.

Brian Klazura scored a winner in double overtime after both teams were reduced to 10 players. Gyasi Zardes has put Bakersfield up in the 1st half, but Patrick Compton tied the score for the Falcons in the 72nd minute.

Ben McKendry scored twice and Nik Robson once as the Lobos advanced to the final. Patrick Poblete and Victor Rodriguez combined for the shutout in goal.

Daniel Valcicak made a vital post-match penalty save and Nick Kolarac scored the deciding spot kick for the Flash. Ryan Byers had put St. Francis up in the opening minutes, but Philip Surprise scored a 2nd half equalizer.

Jan Aubert’s decisive spot kick lifted the Knights into Sunday’s final. Simon Doherty put FDU up with a 1st half goal, but Emmanuel Agyemang equalized for the Hawks.

Dale McDonald scored a rebound goal in the 1st half and Billy Knutsen’s shutout made it stand up.

Alec Golini scored the winner, while Nathan McDonald made 3 saves in goal to record the shutout.

Nathan Bruinsma scored an overtime winner and Yves Dietrich made 4 saves in goal as the regular season champion Leathernecks advanced to the final.