The 2013 NCAA Division I men’s soccer tournament is down to its final eight teams. The quarterfinal action kicks off on Friday with Virginia hosting Connecticut while the other three games take place on Saturday.

The #RoadtoPhilly is down to one game for each team. TopDrawerSoccer.com previews the action below. The home team is listed first, and all times are eastern. 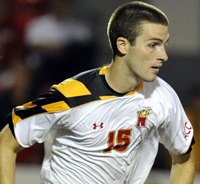 How they got here: Connecticut went on the road and upset top seed UCLA in penalty kicks after a wild 3-3 draw in regulation. Virginia, playing down a man for 89 minutes, defeated Marquette 3-1 at home.

Players to watch: Connecticut star goalkeeper Andre Blake is the one to watch in this one. After the Huskies recent struggle with penalty kick shootouts, Blake has been on the winning end of two in a row now. The Jamaican goalkeeper has only made six saves in the three previous rounds, but he has been huge when UConn needed him the most. Virginia’s attack is dynamic and great on the counter. It will test the Huskies. On the opposite side, Virginia is dealing with the absence of Matt Brown, the starting center back who picked up a red card in the previous round. Talented sophomore Zachary Carroll stepped into the lineup following Brown’s dismissal and it will likely be Carroll in the starting squad again on Friday. Keeping Connecticut off the scoreboard will be a tall task for the Virginia defense.

Keys to the game: Virginia likes to attack on the wings given the speed that the Cavaliers have in those positions. If the Connecticut outside backs can get forward and make Virginia’s wingers defend, they will change the dynamic of the Cavalier attack.

Stat of the game: Courtesy of the Courant, prior to this postseason, the last time Connecticut won an NCAA Tournament game in penalty kicks was 1982. Can that streak possibly continue?

How they got here: California defeated Coastal Carolina 1-0 in the third round behind a goal from midfielder Alec Sundly. Maryland topped UC Irvine 1-0 on a goal from star forward Patrick Mullins.

Players to watch: There are a few players on the Cal side that have made a big impact this season, but the emergence of Omid Jalali has been the most meaningful addition. Jalali, a former standout for Irvine Strikers, has carved his way into the starting lineup for the Bears with his powerful play in the attack. After scoring twice against Oregon State on Nov. 8, Jalali has started the next four games. He had the game-winning assist in the previous round and is the key piece for the attack for the Golden Bears.

Keys to the game: If you are California, the key to the game is stopping Patrick Mullins. If you have to use a brick wall or a decommissioned tank, you make it work. Mullins is the thorn in the side of the opposing defenses and he really never goes away.

Stat of the game: These teams met earlier this season in Berkeley where Cal won 3-2 in overtime. Maryland has definitely improved since then with the young defense maturing over the rigors of an ACC schedule.

How they got here: Notre Dame rolled past Wake Forest 4-2 in the third round. Michigan State went on the road and upset Georgetown 1-0.

Players to watch: These teams played a non-conference game in early November in East Lansing that Notre Dame won 2-0. The main difference between that game and the one on Saturday will be Michigan State forward Adam Montague. The junior missed the previous meeting due to injury and is the missing piece of the puzzle for the Spartans to pull off another big upset. Although, Notre Dame was missing midfielder Nick Besler in the previous meeting and he has proven to be a pretty important piece for the Irish squad.

Keys to the game: The key for the road team is to contain Notre Dame midfielder Harrison Shipp. The senior scored the game-winning goal in the previous round so they are well aware of his talents, but trying to slow him down is a pretty daunting task.

Stat of the game: Notre Dame is the top scoring team in the NCAA Tournament with eight goals in only two games. Despite the snow on the ground, the Irish attack is red hot.

How they got here: For the third time this season, Washington defeated Stanford 1-0 on a goal from substitute Ian Lange. New Mexico put the clamps on Penn State and cruised to a 2-0 win in front of a spirited home crowd.

Players to watch: Beyond the throw-in attack from Washington, there are some talented players on the wings in Darwin Jones and Cristian Roldan, which will put some pressure on the outside backs of New Mexico. Mathew Gibbons and Riley McGovern did well in the previous round against Penn State in shutting down the wing play for the Nittany Lions.

Keys to the game: Defending the flip throw. New Mexico will spend all week getting ready for it, but it’s hard to duplicate until you see it for the first time in a game. The Michael Harris special is the ultimate weapon in college soccer, and the best approach is just to limit the chances that Washington has at throw-ins. If New Mexico can take control of the game early and dictate possession, the flip throw attack will be a minor story.

Stat of the game: The Huskies are undefeated in their last 18 home games, which is one of the longest streaks in Division I.