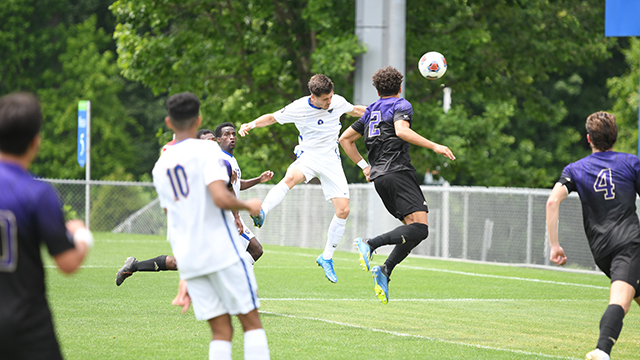 Two programs made the national semifinals for the first time, while two other storied programs advanced with a week remaining in the 2020-21 season.

In the early slate of games, Pittsburgh held off a determined challenge from Pac-12 powerhouse Washington.  After a strong start for the Panthers, both teams hit the crossbar in the first half and the score was deadlocked 0-0 at the half. Valentin Noel provided yet another opening strike, heading home a cross from Jasper Loeffelsend to put the ACC side up 1-0. The Huskies piled on the pressure as the half progressed, in search of an equalizer.

Pitt’s back line weathered the storm, and with UW sending everyone forward (including the goalkeeper), Bertin Jacquesson and Veljko Petkovic both scored with under two minutes left to make it a 3-0 game.

Marshall punched their ticket to the College Cup in the early slate of games, defeating defending champions Georgetown 1-0. Playing a tight game defensively, the Herd did enough to neutralize the Hoya attack, and Jamil Roberts’ goal in the 70th minute decided the matchup.

Experienced stalwarts Thomas Warr and Ryan Wittenbrink secured Indiana’s return to the College Cup, thanks to a 2-0 victory against Big East side Seton Hall. Goalkeeper Roman Celentano made six saves for the Hoosiers, which face Pitt on Friday.

In Monday’s clash between two ACC programs, North Carolina emerged as the 2-1 winner in another closely contested game. With the pounding rain in the afternoon certainly having an impact on both late kickoffs, Wake’s Kyle Holcomb put Wake up in the game’s 10th minute. However, about 30 seconds later, Giovanni Montesdeoca volleyed home the tying goal.

After Santiago Herrera scored from a set piece scramble in the 68th minute, North Carolina’s defense was able to do enough to secure the win and UNC’s return to the College Cup.