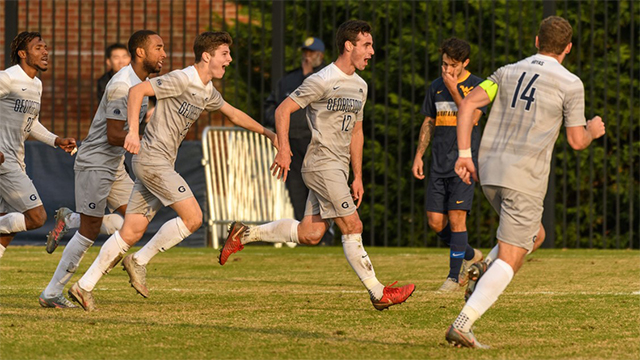 After a hectic travel season over the first week of the NCAA tournament, it’s only a three-hour bus ride for the Bison to Lexington. Slowing the dynamic attack of Jason Reyes, Kalil Elmedkhar and JJ Williams is the key to besting a Kentucky team that has a perfect record at home. Senior goalkeeper Christopher Zappia came up huge in both games last week and might need to deliver once again to give the visitors a chance.

A classic ACC rivalry is renewed in the third round of the tournament when Maryland makes the trip to Durham to duke it out with the Blue Devils. Both teams will like its chances of surviving this test, though perhaps the edge goes to the ACC side. Much of the offensive heavy lifting falls on the shoulders of freshman Issa Rayyan and his ability to break down opposing defenses with his ability on his ball. Daniele Proch generally supplies the finishing touch and Maryland center back Donovan Pines is going to keep an eye on the Italian. Going forward for Maryland, if Amar Sejdic or Paul Bin is on his game, it’s a good sign as the Terps look for the road win.

Thanks to wins from James Madison and the Spartans, Georgetown’s corner of the bracket is wide open with all four teams alive fancying their chances of a College Cup berth. After struggling for goals down the final stretch of the season, Michigan State burst to life over the first two games of the tournament, beating Louisville on the road in overtime on Sunday. A stout defense gives them a chance, as Michael Wetungu should be able to keep up with Achara and Derek Dodson, Georgetown’s two-headed strike force.

After knocking off Denver, a trip to Bloomington and a matchup against perhaps the best team in the tournament is up next for Air Force. Indiana should have Justin Rennicks back and available after his stint with the U.S. Under-20 Men’s National Team, adding another weapon to its attack. The Hoosiers might need to dig deep for goals in this one, as Air Force brings their forward-thinking duo of Austin Dewing and Tucker Bone to the field. If they can cause chaos, an upset might be on the cards.

Don’t be shocked to see this one end in penalties. St. Mary’s, this season’s darlings outside of Lexington, travel to the Farm looking to send the Cardinal home for the first time in three tournaments. The Gaels can score goals, though like Stanford, are pretty good at keeping them out. Three straight 1-0 wins heading into this game reinforce that. Interestingly enough, these two teams met to open the preseason, a 2-1 win for the Pac-12 side. One will bookend the 2018 season, whether from the penalty spot or otherwise.

The battle for bragging rights in the Blue Ridge Mountains visits Blacksburg, with a spot in the quarterfinals also at stake. JMU’s been one of the stories of the tournament, toppling High Point and North Carolina on the road. Manual Ferriol’s red card at the end of the second-round win at UNC could keep him out of this match, which could be a blow for the Dukes’ hopes of a third straight win away from home. Ferriol or not, the CAA champs are peaking at the right time, with just one loss in their last 12. Kristofer Strickler’s goal against Charlotte saw the sophomore’s sensational season continue, and the Dukes must shackle him to have a chance of toppling the Hokies.

After two straight wins in snowing condition, Akron travel to Winston-Salem for Sunday’s third round matchup and hoping for better weather. This has all the makings of a classic match, as both teams like to possess the ball and play attacking soccer. While David Egbo could certainly do damage against the Demon Deacons back like, Wake’s firepower might be too much. Omir Fernandez and Bruno Lapa can score goals from wide spaces, and there is a long line of players eager to come on and make a dent in the game.

It will come as no surprise that when these two teams tussled during the regular season, it ended with zero goals in 110 minutes. A similar outcome seems likely, especially after the Irish kept it safe last weekend against Michigan, winning 11-10 on penalties after a 0-0 draw. If you’re looking at it from a talent perspective, Virginia is a bit younger though possesses more difference-makers in the final third, whether it’s Daryl Dike or Nathaniel Crofts. Whether or not those younger players that can get the better of Notre Dame’s smart and experience defenders, led by senior Patrick Berneski. Fans looking for goals in third round action may have to turn elsewhere.