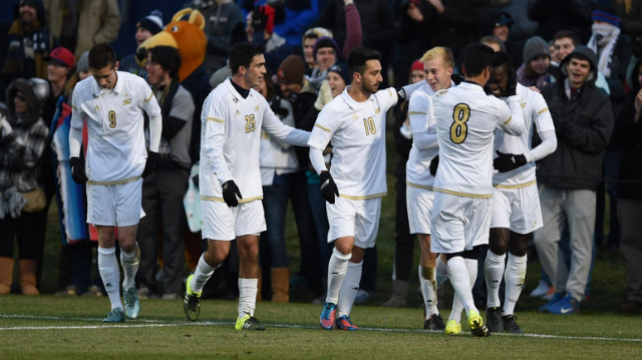 There was little to separate the 16 teams left Third Round of action in the men’s Division I Tournament.

Of the eight games contested over the weekend, only two finished with more than a one goal advantage (Stanford and Syracuse both progressing with 3-1 wins). Georgetown and Boston College required penalty kicks after drawing 1-1 over 110 minutes of soccer, with the ACC side coming out on top.

While both sides looked vastly different than the one that contested the 2013 national championship, Maryland traveled to Notre Dame and found a way to stay alive, defeating the Irish 2-1.

Mael Corboz engineered both first half goals for the Terps. The senior midfielder’s beautiful set piece delivery found the head of defender Ivan Magalhes in the 21st minute to open the scoring. Corboz showcased his aerial ability as well, as his flicked header found freshman Eryk Williamson in the penalty area, and the rising star scored for the sixth time in six games.

Notre Dame cut into the Terps’ lead in the 41st minute when Patrick Berneski headed home a corner kick but that was as close as the Irish would come. The Terps clung on to the one goal advantage, surviving a 12-minute flurry down a man after Magalhes was harshly awarded a second yellow card.

A third straight ACC foe awaits the Terps in next weekend’s quarterfinal after Clemson flexed its offensive muscles to top UC Santa Barbara 3-2.

Seo-In Kim provided a dream start in the 39th minute for the visitors, nabbing the opener for the Gauchos. The lead didn’t last till the break however, as Aaron Jones struck from 24 yards out with just under a minute to go until the half.

Diego Campos and Kevin Feucht traded goals in the 69th and 70th minutes to make it a 2-2 affair, before Kyle Murphy provided the winning margin with 12 minutes left in regulation.

Akron gets past SMU

In everywhere but the final score, the Zips dominated SMU on home turf, but thanks to Michael Nelson’s goalkeeping, squeaked by with just a 2-1 win over the Mustangs.

An own goal in the 43rd minute engineered by Akron’s Richie Laryea provided the winning margin, though the Zips piled up the pressure, outshooting SMU 40-13, setting an NCAA record by taking 19 corner kicks in regulation. Laryea ghosted past the SMU back line onto a through ball, and his cross was bundled into the SMU net by junior defender Taylor Curtis.

Of course, SMU remained in the game until the very end. Akron’s midfielder Goncalo Soares opened up the scoring with his 25th minute effort, a strike canceled out seven minutes later by Brad Ruhaak's own goal off a Bryce Clark corner kick. After Laryea helped to restore Akron’s lead, Clark had one of SMU’s best chances to tie the game in the 61st minute, an effort that the Zips defense cleared off the line.

It was a triumphant return back to Chapel Hill for Creighton Head Coach Elmar Bolowich.

The longtime UNC coach guided his current charges past his old program, as Timo Pitter's second half effort did the trick, and the Bluejay defense held on to a 1-0 road victory to set up a trip to Akron next weekend.

There's plenty of pressure (and hype) surrounding Jordan Morris every time he takes the field for Stanford.

The first player in two decades to represent the full U.S. men's national team while in college, Morris ensured that his college career would continue for another week, scoring twice to lead the Cardinal to a 3-1 win against Big Ten regular season champs Ohio State.

After the first 45 minutes yielded a 0-0 deadlock, Morris drew first blood, finishing Eric Verso's dinked ball over the top in the 53rd minute. Abdi Mohamed's headed finished tied the game in the 62nd minute, and Morris provided a second goal to put Stanford in charge for good. Sophomore Corey Baird tacked on an insurance goal to round out the 3-1 score line.

On another day, crisper finishing might have done the job for Indiana.

Through 88 minutes, the Big Ten’s stout back line limited the Wake Forest offense in front of Colin Webb’s goal to just four shots total. Andrew Gutman and Femi Hollinger-Janzen both found the woodwork in the first half, though the Hoosiers came up empty and with two minutes to go, it was still scoreless.

Wake sub Ricky Greensfelder stepped up to provide the difference. Ian Harkes’s chip found the midfielder near the corner of the penalty area, and the Maryland native controlled and smashed home the winner as Wake fashioned a 1-0 victory for the second tournament game in a row.

Stanford pays a visit on Saturday to Winston-Salem as the No. 1 seed stays alive.