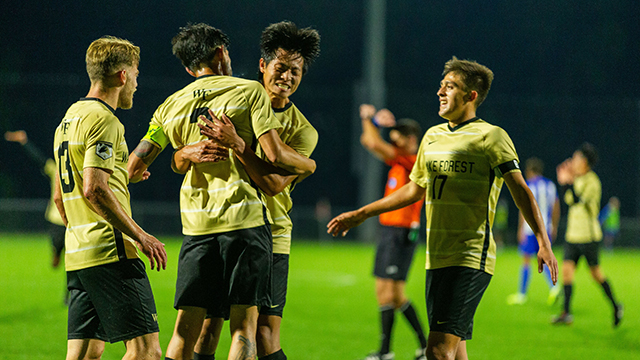 The men’s Division I tournament continues after just three off days, with the quarterfinals set for Monday, May 10. Preview the four matchups below.

The defending champions are a win away from the College Cup, and are rounding into form at the right time. Much can be made of the departure of their three key seniors (Derek Dodson, Rio Hope-Gund, Jacob Montes) but the team dominated Penn State for stretches despite a close 3-2 score line. Talented freshmen have stepped up from the bench, as John Franks, Kyle Linhares and Trevor Burns give the team much-needed depth. Dante Polvara, Giannis Nikopolidis and Sean Zawadzki are a formidable spine. Marshall certainly have the capacity to make a big push here, and confidence will be high after knocking off Clemson. Milo Yosef, Vinicius Fernandes and Jamil Roberts can push forward and control the game for the Herd. The Conference USA side have come through two difficult tests against Fordham and the Tigers and get another challenge here.

Two games in North Carolina, two 2-0 victories for the Pac-12 side. The Huskies are a tough-to-beat side that consistently show the knack for scoring clutch goals in the spring. A quarterfinal matchup with Pitt is the toughest matchup yet, as the Panthers are rolling and have scored 10 goals in two NCAA tournament games so far. Pitt’s quality on both sides of the ball is at a level to control this one, so UW’s ability to keep it close (and perhaps scoreless) gives them the best shot of nipping one from set pieces or pouncing on a mistake. Lucas Meek and Nicholas Scardina continuing to pop up and score those big goals and will be critical. Dylan Teves hasn’t played in either tournament match so far, and if he can’t go here it’s a big blow. From a UW perspective, slowing down Valentin Noel or Veljko Petkovic are good places to start, although wide players like Bertin Jacquesson and Alexander Dexter can fill in the gaps. The ACC side is well-balanced and tourney favorites as the highest seed left.

The ACC is guaranteed at least one College Cup spot after both UNC and Wake advanced to this stage. They played each other just once this season, a 1-0 overtime win back in the fall. Both teams looked different at that point, as a handful of players from the two sides have progressed to the next level. North Carolina’s approach against a Wake side that likes the ball will be fascinating. Do they sit deep and invite pressure? Press high and be difficult to play through? Kyle Holcomb and Omar Hernandez are in pretty good form at this juncture of the season, a good sign for Wake Forest. Prince Amponsah is much more comfortable next to Nico Benalcazar, but this is a very young Wake squad – four freshmen started Thursday’s quarterfinal win against Kentucky (though goalkeeper Cole McNally is a redshirt). It will be fascinating to see if UNC’s experience advantage, whether it’s Lucas del Rosario, Santiago Herrera, Giovanni Montesdeoca or Joseph Pickering, can secure a College Cup spot.

A tough, athletic and heavily-international side, Seton Hall is one win away from the College Cup against one of the most decorate programs in the college game. IU’s ability to cope with the physical approach likely to be adopted by Seton Hall is where this game could be decided. CJ Tibbling will be a handful for the IU defenders Joseph Maher and Daniel Munie to deal with, while going forward, Victor Bezerra will line up against 25-year-old center back Luca Dahn. Seton Hall’s ability to trouble that back line is going to be fascinating, as the Pirates out-shot Virginia Tech by a 24-9 score in the third round. Will tired legs catch up to the Big East side? IU play deep and have experience, something that could tilt the matchup in their direction.