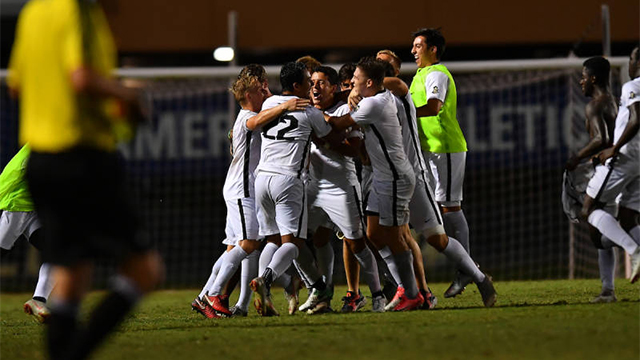 The second round of the men’s Division I tournament is set to serve up some entertaining games on Sunday.

Check out the previews + predictions below (all kicks times EST).

The second round will kick off early on Sunday with a rematch between two powerhouse programs. Indiana has all the look of a potential national champion, though there’s a long and winding road between now and then. Indiana beat UConn in that earlier match, winning 1-0 back on September 2 in Bloomington. The Huskies have the quality and makeup to get the upset, whether it’s senior forward Abdou Mbacke Thiam, freshman Ibrahim Diop and center back Jacob Hauser-Ramsey. Diop is coming off a hat trick performance in the first round, so he’ll be eager to cause trouble for Trey Muse in the Indiana goal. Justin Rennicks will still be missing with the U.S U20s, though Griffin Dorsey is back and Andrew Gutman remains one of the nation’s best.

After show-casing some offensive acumen in Thursday’s 4-2 win in the first round, West Virginia hops on the bus to the nation’s capital looking to put an end to Georgetown’s season. Joey Piatczyc’s name is one often mentioned with the Mountaineers, and it could come down to Kyle Zajac to slow him down. Bottling up Achara and Derek Dodson, the formidable one-two forward punch the Hoyas have, is critical for WVU if they hope to keep playing through after Thanksgiving.

The Paladins are dancing still after a 0-0 draw against UNC Wilmington, winning on penalties. A trip to Charlottesville awaits, and another low-scoring game wouldn't be a huge shock. Similar to a handful of other sides, the Cavaliers haven't played since October 31. That could leave them fresh and ready to take the game to Furman, though there could be some rust to get rid of. Tough to break down, Virginia's ceiling could be determined by how first-year players Daryl Dike and Aboubacar Keita can perform. Furman's showed the ability to triumph in close games or blow out its opponents, leaning on goal-scoring players like Emery May and Laurence Wyke.

DMV soccer fans will have to pick between a trip to the Hilltop or College Park with simultaneous kickoff times for the Terps and Hoyas. Maryland faces a tricky test with the Wolfpack arriving, fresh off a 4-1 win against Campbell. Stopping David Loera in the heart of the NC State midfield is Maryland’s path to victory, though between Donovan Pines and Dayne St. Clair, they have the defensive prowess to slow down what can be a quality attack. The Terps struggle to score goals at times, though if either Paul Bin or Amar Sejdic pop up to score or create, advancing to the third round should be within reach.

A rematch of a regular season game that the Orange won 3-1 (a flattering score line with Syracuse lethal on the counter) the Zips will be on short rest looking to knock off the ACC side. It’s an interesting test for Syracuse, which hasn’t played since October 31, a 3-1 loss to Virginia Tech, as they finished the season going four straight without a win. Ryan Raposo made an impact and the combination of him and Tajon Buchanan make the team dangerous going forward. David Egbo’s brace led Akron to its Thursday win in the first round, and he’ll need to come up big if the Zips are to go on a deep run both on Sunday and beyond.

The 49ers survived the cauldron of penalty kicks, beating Georgia State after 110 minutes of a 2-2 draw. Sunday’s trip to Blacksburg might get a bit leggy, with Callum Montgomery’s experience vital to the upset. Similar to Syracuse, Virginia Tech enjoyed two weeks off in preparation for this one giving them a balance of rest and having to shake off rust. Sophomore Kristofer Strickler’s big breakout this season makes him one of the keys for the Hokies.

Oregon State’s stellar season under first-year head coach Terry Boss continues, as the Beavers beat SMU 2-1 on home turf. OSU’s young side hits the road for a tall test against the Gaels, who still haven’t lost this season. Freshmen Gloire Amanda, Sofiane Djeffal and Adrian Fernandez must reprise their roles this season. The Gaels are one of the best programs both offensively and defensively, playing a Pac-12 side for the first time in the regular season (they lost and drew in preseason to Stanford and California). Jake Rudel’s had a big season, and St. Mary’s have the edge because of rest and lack of travel. OSU has the side to make it close, even with a lack of experience.

The 2018 campaign has been tremendous for Kentucky, and with a perfect home record, the Wildcats don’t have to leave as long as they are playing in the tournament. JJ Williams’ finishing is going to be under the gun in the tourney, and if he can do enough in front of goal, it bodes well. The program’s spine is its strength, with Enrique Facusse in goal, Aime Mabika at the back and Khalil ElMedkhar in the midfield. It’s a tough draw for the Pilots, although they have the firepower to pull it off. Forward Benji Michel scored the winner in Thursday’s first round clash against UCLA, which was one of the best of the opening round. This game is one of several worth watching.

Last fall, Colgate spun off an impressive tournament run, and the Patriot League champs are back at it. After a 1-0 win against New Hampshire, they hit the road to face No. 1 seed Wake Forest. Steven DeLeo bagged the winner, but a lot of the pressure in this one falls on Aram Ouligian and the defense. Wake Forest does concede a set piece goal from time to time, although offer plenty going forward. Omir Fernandez, Justin McMaster, Machop Chol or Bruno Lapa are just a few of the attacking talent that can do damage. If Colgate can weather the storm and nick a goal, an upset isn’t too far fetched.

Another matchup between two prominent programs, don’t expect to see a ton of goals in this one. Michigan State weather some snow and UIC, defeating the Horizon League champs 2-0. Their hopes of winning this matchup comes down to what seniors Ryan Sierakowski, DeJuan Jones and goalkeeper Jimmy Hague can do at Lynn Stadium. Louisville is a tough team to break down, and if Tate Schmitt can engineer goals, it’ll be a good day for the ACC side.

All all-Colorado clash is going to provide a significant challenge for Denver, which looked unstoppable earlier in the season. Andre Shinyashiki is the obvious name to know, though Air Force's attack is no slouch, behind Tucker Bone. Freshman Callum Stretch's excellence can't be overlooked, and if he and senior defender Scott DeVoss can keep the WAC side in check, the Pioneers should be find a way to move along.

Another team that survived crazy weather in the first round, Michigan won an epic penalty shootout 11-10 after drawing 1-1 against Princeton. The Irish haven't changed a ton since Bobby Clark moved on; they are tough to break down, score goals through a variety of ways and don't necessarily rely on a single goal scorer. The Irish have the experience and pedigree to go on a run, with seniors Patrick Berneski and Felicien Dumas anchoring the back line. Shutting down Jack Hallahan won't be easy, though the ACC side should be able to find a way.

Heading on the road, James Madison produced a sensational first round performance to defeat High Point by a 3-0 score on Thursday. Slowing down Manuel Ferriol is the main focus for the Tar Heels, and they can send standout midfielder Mauricio Pineda to do the job. The Dukes have been good on both sides of the ball and will travel to North Carolina hungry for the upset. Getting enough offense is Carolina’s main focus, as they have the defensive prowess to beat anyone. In that regard, Nils Bruening is a focal piece, and Jack Skahan has come on strong as the season’s gone along.

With a penalty kick win against Washington up in Seattle, Lipscomb secured the biggest upset of the round, drawing 0-0 and advancing. Now, the Atlantic Sun champs head all the way to Florida, looking for another win. Shackling Cal Jennings and his 20 goals is the focus, while Logan Paynter is the main man for Lipscomb. If the visitors can shake off the travel and playing 110 minutes, another shock result could be on the cards.

Yet another tantalizing matchup on paper, Pacific’s an under-the-radar side that can certainly make the trip to Durham and come away with the victory. Camden Riley's ability to create problem's for Duke's back line is going to come into play here, while the visitors must find a way to stop freshman dynamo Issa Rayyan on the flanks. This one is poised to be a close, well-fought battle as the ACC side seeks to defend its turf.

How about this for a second round matchup. The last team to beat the Cardinal in the NCAA tournament was the Anteaters, who beat Stanford in Palo Alto on November 23, 2014. Just under four years and three national titles for the Pac-12 side later, it's an interesting story line as the Cardinal line up a fourth straight crown. Can this year's iteration of Stanford pull it off? It would be head coach Jeremy Gunn's most remarkable accomplishment, and he can lean on a senior class of three-time national champions. That includes Amir Bashti and defender Adam Morsharrafa, while redshirt junior Tanner Beason capture Pac-12 player of the year honors. If UCI can pull off the upset, Ivan Canales is likely to be at the heart of it.