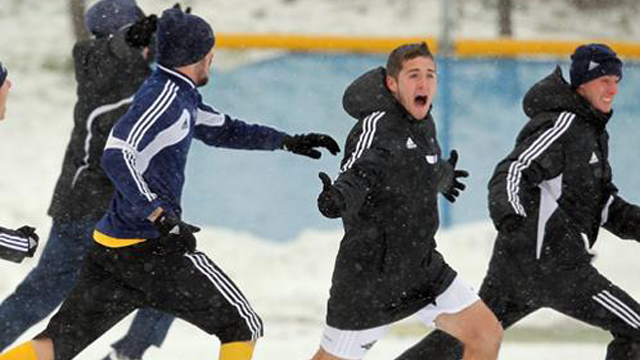 After a draining two weeks, the men’s Division II and III tournaments are finally down to their final four entrants on either side. Predictions and previews for all the semifinal matchups left to play.

Breakdown: With no top seeds left in the field, Southern New Hampshire is the de facto heavyweight left. Rockhurst did the Penmen a favor by bumping off Lindenwood, the No. 1 team in the nation in the final regular season poll, in the quarterfinal round. That could also signal Rockhurst’s dramatic ascendence, for which the Penman will undoubtedly be on guard.

This may be the first trip to the semis for this particular Southern New Hampshire team (it’s the program’s first trip here since 2002), but the Penmen are on a 21-game unbeaten run that’s showed no signs of slowing. They’ll be helped by senior Pierre Omanga, perhaps the best DII striker in the country. The Frenchman has 20 goals in 22 games, a startling return that few Division II sides have been able to counter with any consistency.

Rockhurst got by Lindenwood with its stifling defense and a timely goal. If the Hawks hope to get by SNH, the play of keeper Ryan Bass and his back line will be a major contributing factor.

Breakdown: Even in a field without a No. 1 seed, Carson-Newman has the look of an outsider. The program is the only team left that was unranked during the regular season, and the Eagles failed to make it past the first round of their conference tournament. Still, four of the team’s five losses came in the first half of the schedule, and since then the Eagles are 11-1-0.

Simon Fraser, arguably the hottest team in DII, looks like a runaway freight train of late. The Canadian outfit is looking to become the first program from north of the border to win an NCAA title in any sport, and the Clan sent a message to the rest of the field by dismantling Regis 5-0 on its own field in the quarterfinals. Both Colin Jacques and Jovan Blagojevic are on 10 goals, while strapping striker Carlo Basso is always a threat up top.

Carson-Newman is a bit of a one-man show in the attacking third, but what a show it’s been. Ross Frame has scored 18 goals and has 10 assists this season, and the forward is the undisputed focal point of the Eagles’ action up front. Should the Eagles spring the upset, Frame’s fingerprints will be all over the game. 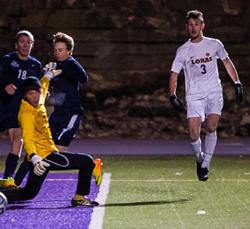 Breakdown: The DIII men’s final four is almost a carbon copy of last year’s iteration. Except for one change. Rutgers-Camden is the only team in the semifinals that wasn’t here in 2012, and it’s also the Scarlet Raptors’ first trip to this stage in program history. This has already been Rutgers-Camden’s best season, and extending it to the next stage will be the next goal.

The Scarlet Raptors sport the longest win streak in DIII at 36 games, and sophomore forward Mike Ryan has been the pleasant surprise of the season. Ryan set the single-season record for goals (21) and points (46), and has been a terror late in the season. Loras, which is in the final four for the fourth time in seven years, will counter with a stingy defense led by senior keeper Dylan Milkent, who heads a line that surrenders just 0.51 goals per game.

While Rutgers-Camden will do its best to pour forward and shuttle possession to its forwards, Loras will rely on its tried and true method of picking its spots and defending ably. That combination will either draw Loras out of its shell or push the Scarlet Raptors into one. Either way, it should be close.

Breakdown: The story line here writes itself. Messiah and Williams are both returning to this stage after appearing here in 2012, but Williams’ journey here has been filled with bumps while Messiah has kept on its immutable path. The Ephs didn’t think they’d even be in the tournament after failing to win their conference tourney, but they squeaked in as one of the last teams in the field.

Williams has rewarded the selection committee’s faith by catching fire and winning its three previous tourney games a combined 9-1. Messiah, meanwhile, is the bully on the block, the defending champion expected to repeat and win its fourth title in the last five years. Messiah’s attacking combination of Joshua Wood (21 goals, five assists) and Jeremy Payne (15 goals, nine assists) is the best in the country, and the defense has given up a scant 14 goals.

Williams looks like incredible underdogs in this game, but the same could’ve been said about the Ephs’ dramatic 1-0 win over conference rival Amherst in the quarterfinals. It’ll take a nearly perfect afternoon for Williams to overcome the hurdle it couldn’t last season, but crazier things have happened.