Men's Division I First Round preview 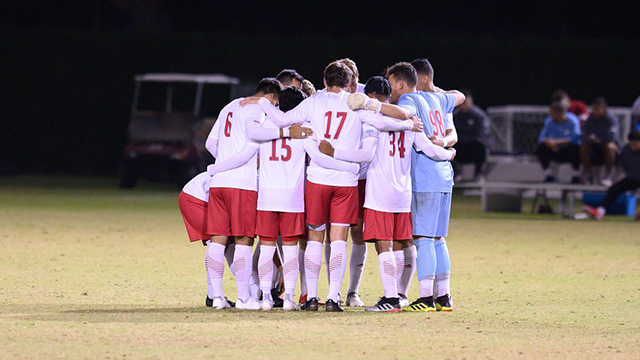 The men’s Division I tournament kicks off on Thursday. Preview all 16 first round matches below (all times listed EST).

One of the most consistent mid-major programs over the past few seasons, it’s been another fantastic 2019 for New Hampshire. Boasted by quality all over the field, including defender Josh Bauer and forward Antonio Colacci, the America East champs are sure to be eager to stitch together a deep run starting in this game. The Knights rode the sensational player of goalkeeper Jahmali Waite to the NEC tournament title – if he continues to play like he has over the past few weeks, FDU will like its chances.

After a winless conference campaign, the Mountaineers spun off three wins in the MAC tournament to clinch a somewhat unlikely tournament spot. Heading on the road to Butler is going to be far from easy, as the Bulldogs have attacking pieces like Wilmer Cabrera Jr. and Brandon Guhl that can cause problems. It’s going to take a special effort from the WVU defense to keep them at bay while looking to strike when they can.

The Dukes host the Big South champions on Thursday, looking to repeat last fall’s extraordinary run to the quarterfinals. Beating the Camels will be no easy task. Thibaut Jacquel tops the nation in scoring with 17 goals, while four other players on the team have at least five goals or more. JMU counters with senior midfielder Manuel Ferriol, who has excelled in a more attacking role this season. There’s the chance of a high-scoring game here if both teams throw caution to the wind in Harrisonburg.

The Atlantic 10 champions travel to upstate New York, matching up against the Orange. It’s one of several intriguing matchups for the ACC, as the Rams are more than capable of picking up a result here. If Ryan Raposo can get going against a stout and physical Rhode Island back line, Syracuse should be able to advance. But players like Peder Kristiansen and Edvin Akselsen can shackle Raposo and give the Rams plenty of chance.

The Sun Belt tournament champs are off to Raleigh, looking to best the Wolfpack. NC State is a tough team to solve at the back, although Coastal is no stranger to road success, having beat Oregon State and Portland on the road at the start of the season. A big night could be needed from goalkeeper Alberto Ciroi for that to happen, especially if David Loera and the Wolfpack attack is clicking.

Even though the Wildcats aren’t flying as high in this season, they still secured an at-large bid in the tournament and will host the MVC champions. Daniel Evans and Kalil Elmedkhar have supplied the bulk of the offense, while Enrique Facusse and Aime Mabika provide steel at the back for Kentucky. They’ll have their eye on Loyola-Chicago’s duo of Aidan Megally and Justin Sukow who have combined for 19 goals this year. Whatever happens, there’s potential for a close, quality contest between these two programs.

Two 10-win teams square off in South Bend, as the Irish seek to avoid upset against a determined Wright State outfit. The focus for the visiting defense is on Jack Lynn, as the Notre Dame forward’s tallied nine crucial goals. Wright State can score goals, but they also concede plenty as well, with 42 for and 36 against. This game should have ample offense in it as WSU looks to go on the road and cause an upset.

The defending champions open their tournament with a first round visit from the champions of the MAAC. It’s a first trip to the NCAAs for Iona, which recovered from a 2-0 deficit in the conference tournament title game against Saint Peter’s to win 3-2. Another monumental effort will be required against the Terps, which can be resolute at the back with Niklas Neumann and senior Johannes Bergmann, but struggle at times to find goals. Mauro Bravo and Josh Plimpton need to have huge performances in order to keep Iona’s season alive.

For the first time since 1965, Pitt is back in the NCAA tournament. Surely eager not to make it a short stay, the team faces a big test against the Patriot League champs. Shackling Josh Luchini and Trevor Koski will be key, as those two have scored 16 of the team’s 25 goals. Pitt’s offense is difficult to handle, as Edward Kizza leads the team with 11 goals. This is another example of how the ACC will be measured against the rest of the country.

A dream Ivy League season for Yale has triggered an interesting Northeast matchup, as the Bulldogs make the trip to Massachusetts. The Eagles have a young side that’s put together some good moments this season. Three freshmen made the All-ACC Freshman team: Stefan Sigurdarson, Amos Shapiro-Thompson and Victor Souza. All three need to deliver to avoid a loss against Yale. In many ways, Yale could be seen as favorites, even given the gap perception between the leagues. If Yale’s to pull off the road win, Miguel Yuste and Mark Winhoffer are two players that need to deliver in the final thid.

The Southern Conference champs head north for a tough test against Charlotte, as the 49ers line up another deep run in the NCAAs. It’s not going to be much of a secret for Mercer’s success, as forward Trevor Martineau is on the national leaderboard for goals and assist, scoring 14 and adding 10 respectively. Defensively, the team has given up its share of goals, something that Charlotte will look to exploit through senior Teddy Chauche, who has seven goals and eight assists. Odds are that this is one of the games that could end up low-scoring or decided by penalty kicks.

A much-improved Big East secured four spots in the NCAA tournament this year, substantial improvement from sending just Georgetown last fall. The Friars will sit as favorites in this one, having pushed the Hoyas in Sunday’s tournament final before falling 3-1. As a proxy comparison between the two programs, NJIT dropped a 4-1 result against Seton Hall, a team that the Friars edged 1-0 in the regular season. That means little when these two teams take the field, and a lot of the focus for NJIT will be on Rene White, and his ability to create danger. White is tied for the overall goal-scoring lead nationally with 17, and against a Providence team that does give up a goal or two, it could lead to a thrilling game.

A rematch between the two teams from the regular season, Louisville is hosting this time after the Cardinals traveled to Tampa and lost 2-0 back on September 9. Neither team lights up the score sheet, and Louisville has conceded the same amount of goals that they’ve conceded (22). The lack of travel could tilt the field in the favor of the Cardinals, but expect head coach Bob Butehorn to have his group well-drilled for the road upset.

On paper, this looks something of a mismatch, as the Pioneers have the fewest wins among the programs that made the tournament. Add in the fact that Missouri State hasn’t lost a game, and it looks like there could be a vast gulf between the sides. However, it would be foolish to assume Missouri State heads into this one and rolls over the Pioneers. While it could happen, Jamie Franks will have his Denver side prepped to slow down Matthew Bentley and Josh Dolling. The Bears should have enough to win this, unless someone like Joshua Drack or Preston Judd pops up and dominates in the final third.

A potentially scintillating matchup is on the cards in Los Angeles, as Seattle heads south in the wake of another WAC tournament crown looking to knock off LMU. They’ll need to best a stingy Loyola side that’s conceded just 18 goals in 20 games. Freshman midfielder Noel Caliskan’s provided the steady hand to lock things down while four players have chipped in four goals apiece. If you’re looking for one program in this game to look to quicken the tempo and open things up, it’s Seattle; sophomore Declan McGlynn leads the team in goals (10) and assists (seven). While one game doesn’t tell the story, it’s going to be interesting to see how programs from the WCC and WAC stack up against one another.

The lowest RPI team to earn an at-large berth, it could be argued that Cal’s win against Stanford last week in Palo Alto got the team over the line. It’s been hit or miss from the Pac-12 side this season, as they’ve previously beat UCSB in Santa Barbara back in September, and also secured a crucial win at Washington to get them into the mix for a tournament spot. Cal’s 3-0 win against the Big West side came when the Gauchos were without Hunter Ashworth or Noah Billingsley on duty with the New Zealand Under-23s; both earned First Team All-Big West honors. So this matchup is going to be much different, with UCSB’s senior-laden side certainly the favorites. Tommy Williamson and Alonzo Del Mundo key the Cal attack, and both must on song to keep up with Finn Ballard McBride and Rodney Michael.