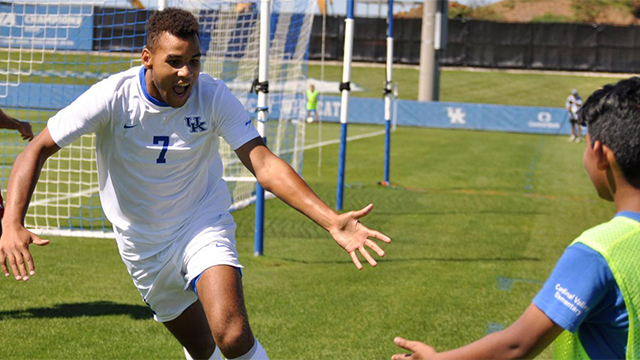 The College Cup field will be determined this weekend, with four NCAA men’s Division I quarterfinals on the docket.

MORE: Pro prospects to watch in the quarterfinals

Preview all four games set for Friday and Saturday below (all kickoff times list EST).

A perennial power in men’s college soccer makes the trip to Lexington, looking to thwart Kentucky’s shot at a College Cup trip in program history. For the visiting Terps, Friday’s game is a chance to make the program’s first national semifinal since the 2013 edition, when they lost in the title game to Notre Dame. This year’s Maryland is quite different than past sides, leaning on a defense anchored by Donovan Pines and Dayne St. Clair in goal. Getting enough goals against a formidable Kentucky side is the key here. JJ Williams and Kalil Elmedkhar are quite the one-two punch, and the Wildcats haven’t lost a game at home all season. It makes for a fascinating battle tactically, as it’s clear what strengths each team brings to the field and what could steer the result in either direction.

Amazingly enough, despite winning three straight national championships, Stanford is set to host its first NCAA Tournament quarterfinal since 2002. This weekend the Cardinal looks to send Akron home from the tournament for the third time in the past four editions; Stanford beat the Zips 2-0 at last year’s College Cup, and in 2015 beat Akron on penalty kicks after a 0-0 draw. The Pac-12 champs’ defensive machine has ramped up, as evidenced by last weekend’s 0-0 draw at St. Mary’s that resulted in yet another penalty kick triumph for Jeremy Gunn’s side. Akron is on the hunt for a third straight win on the road against a seeded opponent, coming through a nail-biter against Wake Forest on Sunday. David Egbo’s ability to stretch the opposition and create problems for Stanford’s well-drilled back line doesn’t yield an inch in the NCAA Tournament. Marcel Zajac’s another forward that must continue his strong play in front of goal. Coincidentally enough, the last goal conceded in the run of play by Stanford in the tourney was to Abdi Mohammed, now a Zip, in the 2015 tournament. At the time, Mohammed was with Ohio State.

One unseeded side is set to reach the College Cup, as both the Dukes and Spartans have pulled off a series of upsets to progress this far. Only one can advance on Saturday in East Lansing and the first side that scores could end up as the favorite to do so. Michigan State always had the defensive makeup to make it to the national semifinals and the combination of a talented and experienced back line will be favorites here. Scoring goals is the issue that’s plagued them at times this season, and seniors Ryan Sierakowski and DeJuan Jones haven’t been as prolific as needed. If that changes, the Spartans could certainly shake things up not just this weekend. Of course, JMU isn’t about to stop here. Despite missing Manuel Ferriol, the Dukes hit I-81 and trounced Virginia Tech. Getting that first goal, whether from Ferriol, Aaron Ward-Baptiste or Carson Jeffris would be huge. Goalkeeper TJ Bush has shown the ability to hold slender leads, so if the CAA champs get off the mark early, don’t be surprise to see JMU making the trip to Santa Barbara.

One of the best Indiana sides in recent memory is one rivalry match away from a second straight College Cup. The Irish aren’t going to come into Bloomington to lay down and should provide more formidable opposition than Air Force managed last weekend. The two sides met already in South Bend this season, ending with a 2-1 overtime goal from Justin Rennicks. A senior-laden team that can call upon the nation’s best goalkeeper (Trey Muse), the Hoosiers will be a tough out for Notre Dame. Senior center back Patrick Berneski’s ability to both limit the damage and offer a threat on set pieces could be UND’s path to victory. That, or finding a way to stifle many of the weapons IU sends out in the final third, from Griffin Dorsey, Rennicks or Trevor Swartz, the nation’s leader in assists.