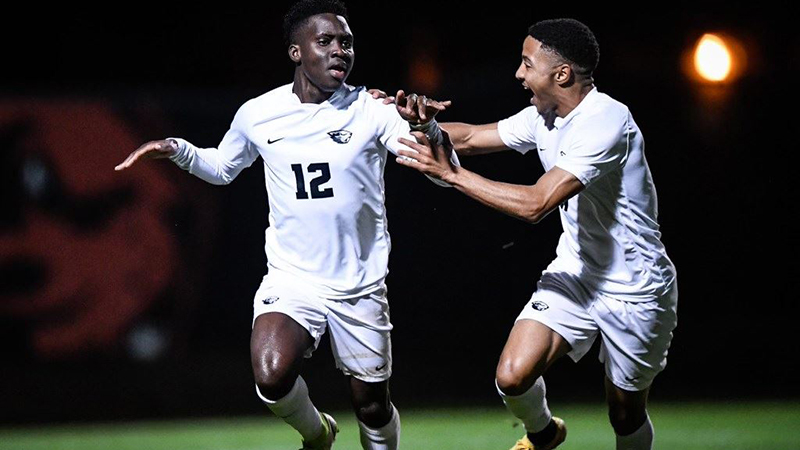 Only two more weekends are left in the men’s Division I soccer season, as the final stretch of the NCAA tournament arrives. Eight teams will tussle in four quarterfinal matchups spanning from the Pacific Northwest all the way to the nation’s capital. The chase for a spot at the College Cup in Cary is just about over.

All games are set for this Saturday, December 4. Check out a preview and prediction for each match below.

Another dominant season from Brian Wiese’s team has the Hoyas within a game of returning to Cary, where the program won it all in 2019. A tough and tested West Virginia side arrive on the Hilltop, seeking to thwart the recent champs from making the trip south. While the Hoyas certainly have the better record, West Virginia has the ability to set up shop, make life difficult for the Hoyas and snatch a win from a set piece. The Mountaineers have conceded just 13 goals in 20 games. Georgetown’s own defensive record is right there, while scoring 40 times this season, including a four-goal outburst in the third round. The Hoyas have an imperious home record of 12-0. An early goal for either side is crucial, as it provides something to defend and look to add to the lead on the counter.

The ACC is guaranteed at least one spot in this year’s College Cup, as an all-ACC quarterfinal is set for South Bend. Pitt is sure to be motivated to beat Notre Dame after the Irish knocked the Panthers out of the ACC tournament back on November 10 in Pennsylvania. Notre Dame actually swept the two matches this season, as the Irish also secured a 1-0 overtime triumph on October 16. With six straight shutouts, Notre Dame’s defense is in the form needed to reach the College Cup. Of course, even without Veljko Petkovic, who was reportedly dismissed from the program, Pitt’s attack can wreak havoc. Bertin Jacquesson needs to be dialed in, while the collective ability of the team to score is one of its big strengths. Like in all games, the early goal will be critical. A Pitt strike puts pressure on the hosts, while Notre Dame’s excellent defense can sit on a lead and turn away the Panther attack.

Two sides that put on a show in their respective third round matches seek a quarterfinal encore up in Seattle. Washington, which has shown the ability to either put on a defensive masterclass or keep up in a high-scoring test, welcomes the unbeaten Billikens to Husky Soccer Stadium. SLU looked extremely dangerous on the road at Duke, striking on the counter attack and looking for Simon Becher or John Klein to make plays in the final third. Provided that the goals are there, the SLU defense, including A.J. Palazzolo and Kipp Keller, need to put in a shift in front of goalkeeper Patrick Schulte. Washington can threaten from set pieces or open play to great effect, and Dylan Teves has picked the right time to be in the form of his life. This is the third tournament in a row head coach Jamie Clark has steered UW to the quarterfinals, and fourth overall. Is this finally the breakthrough?

Rounding out Saturday’s games is the No. 1 seed seeking another straight win and a trip across the country for a national semifinal. The battle in the midfield could be the decider here, as Sofiane Djeffal looks to dictate proceedings against Ousmane Sylla and the rest of the Clemson midfield. This Clemson side may not be quite as talented as past sides – with last year’s team a good example – but at the business end of the season have found a way to get the job done. It’s been about the collective, with 12 players chipping in to score 47 goals. The defense has been good enough in front of goalkeeper George Marks with Justin Malou, Charlie Asenio and Oskar Agren offering experience and quality. Tyrone Mondi, Mo Thiam and Tsiki Ntsabeleng have all popped up to score big goals. A close game here seems inevitable.