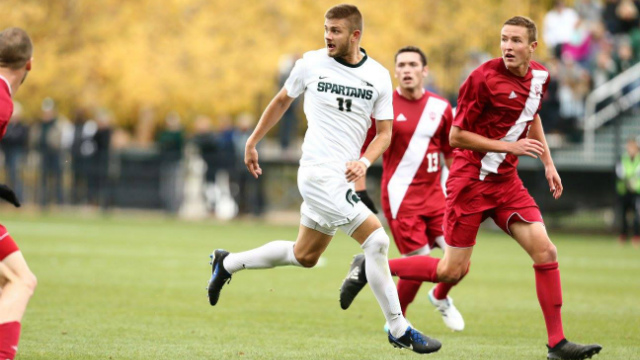 The men’s College Cup field will be finalized this weekend, with the four NCAA quarterfinals slated for Friday and Saturday.

Preview each match below.

When the draw came out, Akron surely would’ve loved to have been a top four seed. But the prospect of a trip to Louisville isn’t too daunting, at least from a logistics perspective. And it’s not going to be easy for the likes of Stuart Holthusen and Sam Gainford to waltz into this one and find a win. However, there’s little arguing that the Zips are the hottest team in the tournament, winners of 12 straight. An offense that’s scored 50 times this season, can’t be counted out at any point. Freshman center backs Daniel Strachan and Joao Moutinho have provided consistently and quality at the back, and will be pressed into duty to slow down Louisville.

Locking down Tate Schmitt is a big key to keeping the Cardinals quiet, as he’s scored four game winners this season. Defender Tim Kubel’s service is a big factor as well, whether from dead balls or the run of play. Meanwhile, Mo Thiaw’s a dynamic and athletic presence up front. Adam Wilson’s return to the midfield in the second round is a big boost, after he missed the ACC quarterfinals. There’s little to pick between these two teams, though there should be a couple of goals to see.

The Big Ten will send one representative to this year’s College Cup, with two of the best defensive sides facing each other in Bloomington. Indiana’s yet to lose a game this season, as the Grant Lillard-backed defense capable of snuffing out just about anything thrown their way. Freshman Mason Toye’s provided enough of a punch, as his team-high 10 goals lead the way. Griffin Dorsey, another first-year phenom, can both score and create. Breaking down Michigan State won’t be easy, as was showed when the two teams drew 1-1 earlier in the season.

Goalkeeper Jimmy Hague is a big reason why the Spartans are a tough out, while Jimmy Fiscus enjoyed a tremendous senior campaign as well. Mustering enough going forward is the question for the visitors in this one. Ryan Sierakowski and DeJuan Jones provided most of the scoring thrust this year, and need to be on form in order for the road side to secure a trip to Talen Energy Stadium.

A third straight ACC opponent is all that stands between Fordham and a shock appearance in the College Cup. Of course, those teams that have seen the Rams this season know that they are no easy out. Jannis and Jannik Loebe are the attackers that help things tick over, combining for 15 goals and 13 assists. Goalkeeper Rashid Nuhu’s penalty kick heroics were the difference in the third round against Duke, and he’ll need to show that same form again when the Atlantic 10 side returns to North Carolina.

The Tar Heels seek a second straight College Cup appearance at the end of another quietly excellent season. Midfielder Cameron Lindley remains one of the best players in college soccer, and can wreak havoc on any defense in the nation. Alan Winn’s scoring touch this season’s been critical, as he’s found the back of the net in 10 of his 15 games. Goalkeeper James Pyle returned from injury at the end of October, and his experience will be vital at the business end of the season.

Wake Forest and Stanford have clashed in both the 2015 and 2016 editions of the NCAA Tournament. Like in 2015, Wake Forest hosts the Cardinal with a spot in the College Cup on the line. That year, a 2-1 victory in overtime propelled Stanford into the Final Four. In 2016, penalty kicks decided the national title between the two teams, with the Cardinal winning that one.

Revenge is going to be on the mind of Wake Forest, which has been in scintillating form for most of the season. Jon Bakero’s put together a tremendous campaign, scoring 16 goals and adding 14 assists. The Spaniard’s battle with Tomas Hilliard-Arce could be decisive, as the latter has held the upper hand the past two clashes. Bakero has plenty of help in the final third, whether it’s Ema Twumasi, Luis Argudo, or freshman Brandon Servania and Omir Fernandez.

Of course, Hilliard-Arce and the Cardinal’s stout defensive makeup give them every chance to knock the Demon Deacons out of the tournament for a third straight year. Foster Langsdorf, who scored the overtime winner in 2015, remains as dangerous as ever leading the line. The depth is impressive too, as Drew Skundrich, Amir Bashti and Bryce Marion can make things happen. The longer this one remains scoreless; the more Stanford will like its chances of advancing to a third straight College Cup.