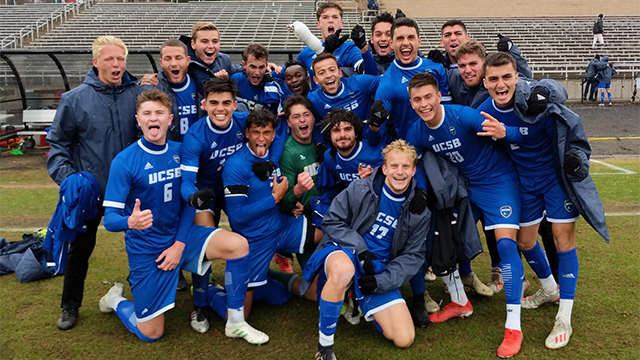 Heading into this weekend’s men’s Division I tournament quarterfinals, the questions are endless. Can the ACC get three programs into the College Cup? Will Stanford and Wake Forest return to the semifinals? Is Georgetown going to continue to blow opponents away?

Quarterfinal action kicks off in Clemson as the recent three-time national champions Stanford make the long journey to battle it out against the ACC side. The Tigers’ high-powered attack needs to find a way to crack a tough Cardinal back line. Robbie Robinson is crucial to Clemson’s hopes, even as Grayson Barber and James Brighton have chipped in, while Kirmani Smith hasn’t scored since October 11 against Louisville. Keeping Stanford’s attack, which is dangerous from set pieces and the speed of Ousseni Bouda and Gabe Segal, is the key here for a Clemson team that won 2-1 in overtime in their first two tournament matches. Stanford still has players on this roster more than capable of going on the road and beating an ACC team, as they did on the way to their national titles from 2015 through 2017. Look for them to repeat the performance and make it back to the College Cup.

Two one-loss, one-tie teams square off in Charlottesville, as the Mustangs look to crack the code against the No. 1 overall seed in Virginia(m). It’s hard to argue that there’s a better team in the field than the Cavaliers, as they are well-balanced from front to back. Goals can dry up at times, but considering they give up next to nothing, at times it won’t matter. UVA’s given up just seven goals all season, statistically the best in the country. The center back duo of Andreas Ueland and Henry Kessler are difficult to dislodge, with Colin Shutler always ready to spring into action. SMU has the horses to cause problems, whether it’s Garrett McLaughlin up front, Gabriel Costa from midfield or the bombing runs of Eddie Munjoma. The problem will be for SMU is what kind of a balance to strike, as UVA can sit in but strike quickly when given a chance, whether from a set piece, build up play or on the counter.

Arguably the best matchup of a very impressive quarterfinal field, Georgetown’s bruising attack has hit a new gear in the NCAA tournament, and will look to keep it rolling against a tough Washington team. The Hoyas have spun off two five-goal performances against ACC teams, and are riding a wave that could carry them into the College Cup. The attack is deep, whether it’s starters such as Derek Dodson or Jacob Montes, with Paul Rothrock, Achara and Zach Riviere likely to come off the bench. The Huskies have the back line to slow that down, anchored by Ethan Bartlow in the middle with support from Kasey French and Charlie Ostrem. Given that Lucas Meek and Blake Bodily continue to make plays in the attacking third, that’s given the Huskies more than enough during their impressive campaign this season. Whether that formula yields a College Cup on the road is the latest hurdle to cross.

The lone unseeded team standing at this point in the tournament, the Gauchos have spun off two straight wins on the road. Three straight and it’s a return to the College Cup for the first time since 2006. Even facing a long cross-country flight, UC Santa Barbara(m) has the makeup to land in Winston-Salem and head back with a result. It features a well-balanced attack that includes seniors Thibault Candia and Will Baynham, and buoyed by freshman Finn Ballard McBride and junior Rodney Michael. The defensive presence of Hunter Ashworth and Noah Billingsley offers protection to Ben Roach, one of the top goalkeepers in the nation. Wake Forest(m) enters a bit shorthanded, with Aristotle Zarris and Justin McMaster sidelined. UCSB has the kind of physicality to give the Demon Deacons all kinds of problems. The effectiveness of Kyle Holcomb, Machop Chol and Calvin Harris are all going to be crucial, not to mention the senior leadership and quality of Bruno Lapa. An early breakthrough for Wake Forest could open the floodgates, but expect this to be an extremely close game.