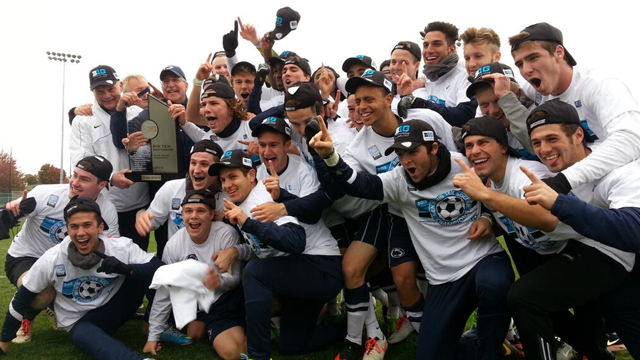 There are no longer any undefeated teams in Division I men’s soccer.

California, Notre Dame, and Washington all fell from the undefeated ranks with the Huskies surviving the longest before UCLA topped the conference rival on Sunday 2-1.

With the defeats, the top of the TopDrawerSoccer.com Top 25 takes a major shake-up with Georgetown taking over the top spot. The Hoyas defeated Marquette 1-0 on the road on Saturday in an important Big East showdown.

The Bruins climb up to No. 2 following the win over Washington. Despite the lack of success in defending the flip throw, the Bruins still moved the undefeated streak to four games.

California slips to No. 3 after losing to San Diego on Friday. The Golden Bears have five games remaining on the schedule – all conference tilts. Winning the Pac-12 is still in reach for the Bears, but there is little room for error with Washington and UCLA breathing down their necks.

Notre Dame also heads down the poll slightly, as the Irish check in at No. 4 this week. Notre Dame lost to Virginia on Saturday, which was the first lost of the season for Bobby Clark’s side. Notre Dame was without the services of midfielder Nick Besler in the ACC clash.

Washington rounds out the top five after the disappointing defeat to the Bruins. The Huskies did cruise to a 2-0 victory over San Diego State( on Friday so the weekend trip was not a complete loss.

The biggest move came from Penn State, which jumped into the top ten following a win over Northwestern. Penn State won the Big Ten regular season championship thanks to the game-winning goal from Jordan Tyler, who returned to the squad this season after missing 2012 with a knee injury.

Check out the full TDS Top 25 (plus others that received consideration): here.