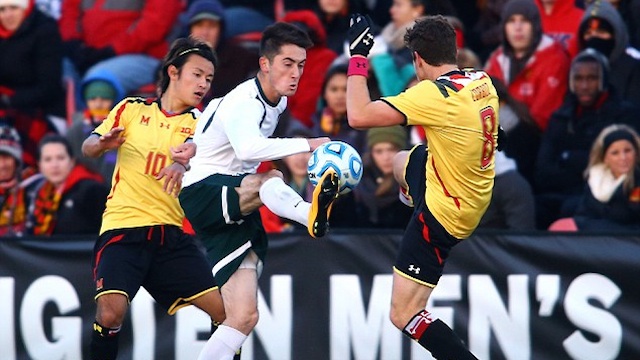 For the eight teams left in the NCAA men’s tourney field, the College Cup is agonizingly close. With just one win separating that group from a trip to the semifinals in Cary, North Carolina on Dec. 12, a loss at this stage might be the hardest to take of them all. Let’s take a glimpse at the four matchups across the country this weekend and see what shakes out.

How tough is it to win at Morrison Stadium? That’s a question UMBC hopes to answer on Friday as these two kick off the quarterfinal round of the NCAA tournament. The Bluejays, meanwhile, are perfectly happy to play their third straight game at home, meaning the first time they’ll have to hop on a plane in the postseason will have been for the College Cup.

The matchup here is undoubtedly UMBC’s titanium defense pitted against Creighton’s salty attack. The Bluejays have gotten their three goals from three different players, while UMBC has yet to give up a goal in the tourney with defender Oumar Ballo putting in work. Creighton’s homefield advantage and experience gives it the edge. This is the Bluejays’ third appearance at this stage in the last four years under coach Elmar Bolowich.

Virginia is a puzzling case. The Cavaliers were saddled with a comically difficult draw, which forced them to somehow get past defending national champ and No. 1 seed Notre Dame on the road. They did. Virginia’s had to adopt a more direct style to deal with both weather conditions and strength of schedule, and that will probably be the case again against a Georgetown team that’s rolling.

While the Hoyas aren’t the same pass-happy team they were a year ago, they can still boot it around. Expect them to set up to dominate the midfield, especially at home, and for Virginia to play more over the top on counters. The Cavs have a deadly threat up top in Darius Madison, while Georgetown underclassmen Arun Basuljevic and Joshua Yaro make the base of one heck of a spine.

Michigan State will be excited to be at this stage for a second consecutive year. The Spartans are also the last Big 10 team standing, and they still haven’t lost to a top 25 team all season. But one also has to wonder whether or not their legs are back from a 110-minute marathon against Washington last weekend that ended with a satisfying but emotionally draining penalty kick round. Providence, meanwhile, is bouncing straight off 90 minutes. Does that factor in? Hard to tell.

In any case, Michigan State’s midfield has guided it here. Jay Chapman was announced as a Hermann Trophy semifinalist this week, and when paired with Fatai Alashe there aren’t many better one-two combos in the nation. The Friars, meanwhile, are a tough team to figure out. They dispatched with a relatively weak Dartmouth team before an impressive 1-0 win over UC Irvine got them into the Elite 8 for the first time ever. The Friars don’t have superstars, but they’re one of the most cohesive units left in the tourney. Will it matter on the road?

If there’s an upset special on the platter, you could be looking at it right here. There’s no questioning the fact that UCLA is riding a heater right now. After avenging regular season losses to get by San Diego and then California, which actually beat the Bruins twice in 2014, one has to wonder if this is UCLA’s year to break the 12-year title drought. With senior midfield sensation Leo Stolz, forward freshman of the year candidate Abu Danladi and a host of talent in defense, UCLA certainly has the look of a championship team.

But it’d be foolhardy to overlook the Tar Heels, who’re on a season-best run of their own. North Carolina lost to this UCLA team in August in Chapel Hill, but that was an eon ago in soccer terms. North Carolina may not be seeded, but the team has been to this stage in the tourney an astonishing six times in the last seven years. There are a dizzying number of seniors on the roster too, which casts North Carolina as a veteran team that won’t be overawed by the stage. But a cross-country trip to the highest seeded team left in the field will probably be a bridge too far.