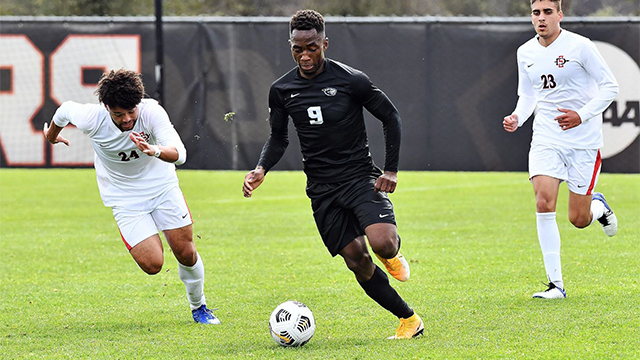 Between injuries and departures for the professional ranks, there are plenty of changes from the preseason Top 100 players to watch list.

Jacob Montes, Rio Hope-Gund and Kimarni Smith are among the trio of top-ranked players that left before the season ended. Spencer Glass' season ended with a broken leg, a big blow to Indiana's national title hopes.

Talent remains, however, with Oregon State forward Gloire Amanda sitting at No. 1 in the midseason update. The Oregon State forward's enjoyed an excellent season as of publication. Amanda has 12 goals and six assists, although OSU's slipped up after a very good start to the spring campaign.

The Player of the Year race in men's soccer is wide open. Valentin Noel continues to score big goals for Pittsburgh, Indiana sophomore Victor Bezerra has been in scintillating form for the Big Ten side.

Check out the complete update to the Upperclassmen Top 100.

The Top 100 rankings were constructed in consultation with The Soccer Syndicate, North America's only independent soccer scouting network.