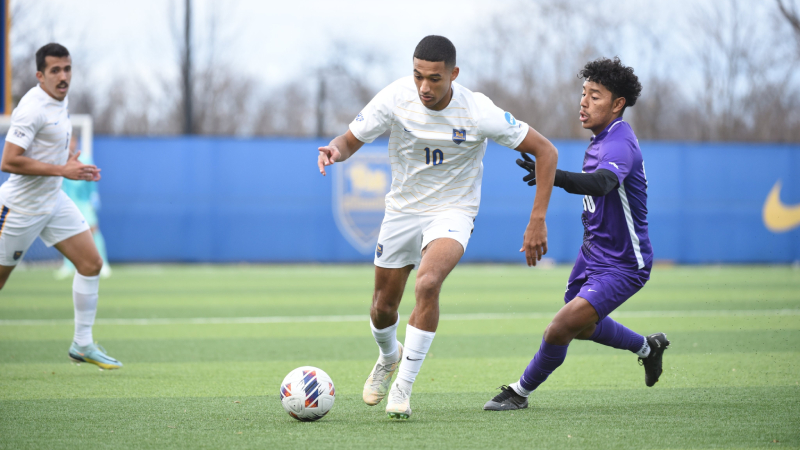 Saturday brought the kind of elements one would expect from the quarterfinals of the NCAA Tournament. There was the obligatory extra time winner. There was the inevitable yet brilliant goal. There was the continuation of a dream run. And then, there was the composed performance, a team turning in the expectedly cool showing.

Here’s how it all happened.

Was it really surprising, at this point? Creighton, with their solid back five and pace up front, have matched up against every type of team — and won. Whether it could do it against a solid Duke side, though, was up for debate. Those fears were quelled within 17 minutes when Duncan McGuire lashed a shot into the bottom corner for a 1-0 lead. Duke pulled one back 12 minutes later, but Creighton struck twice before half time, with Charles Auguste finding the top corner from 25 yards out to add some breathing room. There was, inevitably, some Duke resistance. The Blue Devils piled on the pressure in the second half and scored in the 75th minute after a Creighton own goal. Some nervy moments followed, with Duke piling on six shots in the last 15 minutes. But Creighton held on, deservedly clinching their first College Cup berth in 10 years.

Through 102 minutes, 30 Pittsburgh shots had failed to find the net. Portland goalie George Tasouris had saved 10, another 20 had been off target. Then, on the 31st — in the 114th minute — everything came together. Bertin Jacquesson provided the cross, a lovely whipped thing that dipped right onto the edge of the six yard box. And Valentin Noel met it, leaping narrowly higher than a Portland defender to nod home. The home crowd was appropriately ecstatic, Noel’s celebrations were expectedly wild. And the Panthers clinched their second College Cup berth in the last three seasons. In truth, this hadn’t been an easy contest. Portland had made things difficult for long periods, often taking the fluidity out of the game. And with Tasouris making a slew of saves, penalties seemed like a real possibility. But Jacquesson and Noel combined with less than five minutes to go, a wonderfully worked moment deserving of any win.

This wasn’t necessarily the most open of contests. The two sides combined for just six on goal. The teams’ usual attacking forces — Levonte Johnson, Nathan Opoku, Alex Nagy — saw their influences limited. But two Syracuse moments of magic changed proceedings. Curt Calov was first, scoring directly from a corner thanks to a whipping and dipping shot that flew past the Vermont goalkeeper. Daniel Pacella equalized for the Catamounts, but Syracuse’s two most obvious attacking threats showed their quality three minutes before half time. Opoku darted down the line, creating space away from his defender before dragging his cross to the near post — which Johnson met and scooped into the far corner. The second half brought little other serious action, with the Orange seeing things out to continue their

In truth, Indiana’s first goal alone might have made the Hoosiers deserving of a win. Moulane Goumballe corralled a throw in off his chest in the corner of the box, and in one fluid motion brushed a defender off his back and lashed the ball into the top corner. Sam Sarver clenched his hair in disbelief, a UNCG defender fell in anguish. And the visiting Hoosiers celebrated raucously in front of the home fans. Sarver added a second goal in the next period, lashing the ball into the bottom corner after a mazy run into the Spartans’ box. But this was hardly a simple contest for Indiana. UNCG applied pressure with regularity and forced goalkeeper JT Harms into four saves. The Spartans haven’t been on a run of upsets. They took on a perennial Colle Cup contender, and just couldn’t quite find enough attacking guile on the day. Meanwhile, Indiana heads to its 22nd national semi final — and win a real chance to win College Cup number nine.