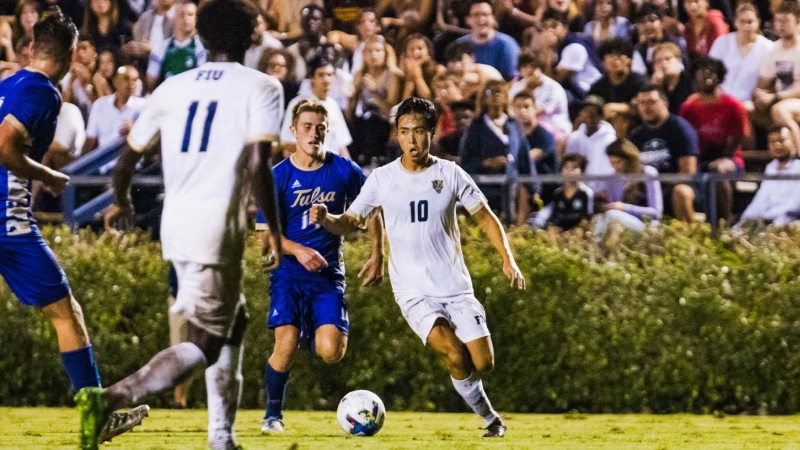 It's admittedly difficult to make much of the men's sweet 16. After the madness of the first weekend of playoffs, anything seems possible. Half of the seeded teams are no longer in the field, while a few other trendy picks have been eliminated. Still, there's a lot of quality remaining, including a few teams that might just have put everything together at the right time. Here's how every game might unfold.

How can you bet against Creighton at this point? The Bluejays have beaten Georgetown, Missouri State and Washington, dispatching all three with classy counterattacking performances. Their back three is solid and difficult to break down, while the nation’s leading goalscorer Duncan McGuire can stretch opposing defenses. Tulsa wasn’t entirely convincing in its second round match against Georgetown but still scraped a 1-0 win in extra time. The Hurricanes are a better team than they showed Sunday night, though, especially when Alex Meinhard is at his best in the final third.

In a contest between two playoff unexpecteds, which side has another win? Vermont was dead and buried after 65 minutes in last round, trailing SMU 2-0. But the Catamounts turned things around, with Max Murray leading a dramatic comeback. That momentum might just carry over for a team that’s starting to believe — especially with all of the ranked sides now watching from home. But UCLA has some quality of its own, having sent Clemson home in the last round. The Bruins are a more defensive side, but found their feet in the final third last week — and could steal a win here.

At what point did Western Michigan stop upsetting teams, and simply start beating them? The Broncos have picked up big wins all season and got another one last round by edging Lipscomb, 1-0. Their reward is a reasonably kind matchup against Portland. Although the Pilots have enjoyed success of their own, the Broncos — attacking intent and all — seem to match up well. But Portland certainly has some attacking threats, especially winger Brandon Cambridge, who has scored and assisted in bunches.

Duke produced a statement win against Denver, scoring twice within in the first 15 minutes to cruise to a 3-1 win over the Pios. Shak Mohammed was at his best, scoring and stretching the defense. Peter Stroud was similarly effective, running the show from center midfield for all 90 minutes. Such a solid performance is bad news for an FIU side that needed 12 rounds of penalties to beat New Hampshire. Though the Panthers were impressive in regulation time, the game truly could have gone either way. A more convincing win would perhaps have set them up better for Sunday’s game. Still, FIU has a match winner in Stephen Afrifa, and won’t be lacking in confidence against one of the nation’s best.

Syracuse seems to have won these kinds of games all season. Ian McIntyre’s side thrives under fine margins, embrace tight contests, enjoy tight matchups. But Sunday Syracuse will play the only side that has bested it at its own game. The Big Red are a similar side, one built on a reliable, tight structure, with enough creativity in the final third to punish opponents. It worked to perfection when these sides met in early October, with Cornell producing a 2-1 win. It also worked last week, as Cornell held Maryland at arm’s length before scoring two late goals. Do they have another performance in them?

Kentucky survived its big internal test, thrashing a reeling South Florida team in the absence of striker Eythor Bjorgolfsson. But Pitt was similarly successful, putting three past Akron in a solid performance. But, looking at the squads and form, it’s easy to wonder if Pitt will have enough. Bertin Jacquesson seems to be back at his best, but the defensive structure around him might not be enough. Still, with all of the madness around college soccer last week, seeing another no. 1 team fall wouldn’t be a massive surprise.

Marshall has turned its season around drastically in recent weeks, rebounding from a Sun Belt tournament exit to James Madison with wins over Elon and Virginia. This match doesn’t appear as tricky on paper, but the Hoosiers are enjoying a fine run of their own. Ryan Wittenbrink has been their star in recent weeks, with five goal contributions in his last five games. Stopping him will be key for the Herd. But they’ve got some offensive weapons of their own, too. Freshman forward Matthew Bell has double digit goals on the season and will look to add more on the biggest stage.

UNCG can certainly score goals. The Spartans average 2.37 per game, and boast an array of goalscorers and creative players to turn to. But they’ve been sneakily good defensively, too, especially in big games. They will need another big defensive performance against a dynamic Stanford attack. The Cardinals have gotten contributions from all over the pitch, but Carlo Agostinelli has starred in recent weeks, scoring and assisting in bunches. Stopping him will be crucial. It's the first meeting between these two sides, and anything can happen. A fast start will be key.