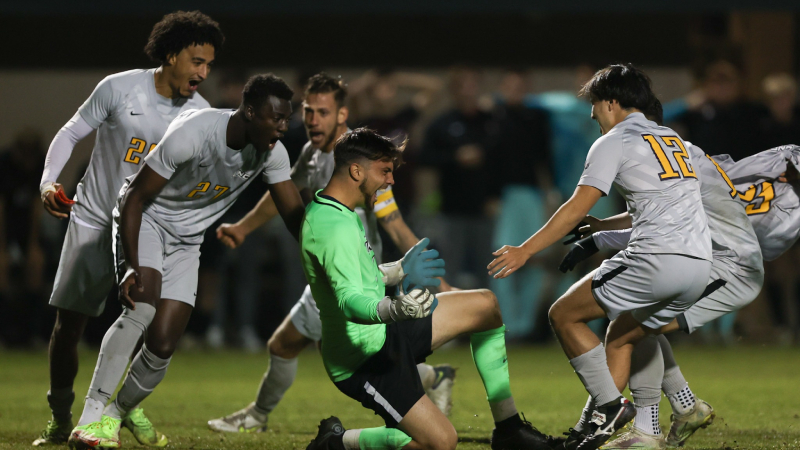 This weekend wasn’t quite as chaotic, but there was drama aplenty across the eight contests. Syracuse left it late to see off a nearby opponent. Pittsburgh knocked out the highest remaining seed with a sensational strike. And Creighton continued to find results from losing positions. Here’s a look at every game.

Creighton Comes From Behind to Beat Tulsa, 2-1

Creighton is used to trailing at this point. The Bluejays have twice come from behind to beat higher ranked opponents in postseason play. And they did so once again this weekend, scoring twice in the second half to overcome a 1-0 deficit to no. 15 Tulsa. Giorgio Probo buried the winner from the penalty spot, a deadly, hammered thing into the top corner past a sprawling goalkeeper. The equalizer was also impressive, with Mark O’Neill nodding home from a teasing corner kick. There was defensive work aplenty, too, with Luke Mitchell making a goal line clearance with 11 minutes remaining and the game knotted at 1-1. But it was Creighton’s clinical attack — one that showed little regard for the deficit it faced — that sealed things. And it kept this remarkable season going.

Eliot Hamill made the save look easy, but it truly wasn’t. His Duke team was leading FIU, 1-0, with 7 minutes remaining, and Panthers forward Rasums Tobinski had risen for a header. But Hamill equaled his effort, corralling the ball before cradling it on the ground. It was the big save, the crucial moment, in a solid defensive performance from the Blue Devils. FIU created more chances on the day, and often looked more likely to score. But Duke grabbed a lead and held on, clinching a spot in the last eight — albeit with little aesthetic appeal.

Yaniv Bazini didn’t provide the cleanest of hits. The Vermont midfielder was surrounded by three UCLA defenders and found the slightest of spaces to have a shot. His left footed shot swung and dipped, a swerving thing that wrong footed the opposing keeper. It wasn’t necessarily the prettiest way of starting things in a 3-0 win. But Vermont likely didn’t care. The Catamounts needed 60 minutes to break the deadlock against a resilient UCLA side, but used a quick trio of goals to overcome the Bruins in a controlled showing. Vermont outshot and outpassed the Bruins, defending when needed and attacking in the right moments to post a performance that was perhaps far more important than the result itself. An hour without scoring could have led to panic, to fear. But the composure that defined the showing shined through. And it might just lead to something more in the weeks to come.

Syracuse Uses Late Winner to Get Past Cornell, 1-0

Giona Leibold kept running. The Syracuse forward received a pass from his goalkeeper and scampered into open space, dribbling past one defender before brushing another aside, and rolling the ball into the bottom corner. It was a resolute thing, a moment of individual brilliance to edge a Cornell side that had defended dutifully for 83 minutes. And it proved to be enough to send the Orange through to the elite eight. In truth, Syracuse could have opened this one up earlier. It had seven shots in the first half and enjoyed long periods of possession. But a clear cut chance never quite materialized, with the Orange leaving it late before finding a winner. Cornell had some moments of its own, but Syracuse goalie Russell Sjealy made a few neat saves while the defense in front of him diverted pressure. And Leibold’s run sealed it.

It turns out, that when a team has good players, those players might just win games. Bertin Jacquesson proved as such for Pittsburgh Sunday night, fizzing a shot into the top corner with 3 minutes to go to lift his team past Kentucky, 2-1. It was a contest of individual moments Sunday evening, as Pitt was outshot and often dragged apart by a controlled Kentucky side. But it got goals from a corner and long range strike to beat the no. 1 team in the nation. Kentucky opened the scoring through Casper Groening shortly after half time, but Pitt responded quickly. The remainder of the contest was open, and after Pitt had a man sent off for a reckless tackle with 10 minutes remaining, it appeared that Kentucky might surge ahead. But Jacquesson swiftly dispelled that notion, sending Pitt to the last eight with a remarkable strike.

It wasn’t the prettiest goal. A Brandon Cambridge flick, a Delentz Pierre touch. But the ball found the back of the net all the same for Portland in its 1-0 win over Western Michigan. The Pilots controlled much of the game, and drew a remarkable performance out of Hunter Morse, forcing the Western Michigan goalkeeper into seven saves. But Western Michigan kept the Pilots honest, threatening regularly and coming close often. Still, Portland had enough on the day, getting a scrappy but deserved goal to advance.

This season, Indiana has so often relied on Ryan Wittenbrink to find the back of the net, to produce a winning goal. On Sunday night, neither of his two shots found the back of the net. Instead, he set up the one that did. Wittenbrink provided the assist for defender Brett Bebej as the Hoosiers beat Marshall, 1-0, to advance to the elite eight of the NCAA Tournament. It was a performance characteristic of Todd Yeagley’s side this season, one built on defensive solidity and opportunistic attacking play. Marshall had its looks, but JT Harms made a pair of crucial saves to keep the Herd out. And quietly, after a chaotic start to the season, there just might be something to this Indiana side.

Emmanuel Hagan's penalty was a calm one. The UNCG defender stepped towards the spot, and after four controlled strides, sent the goalkeeper the wrong way with the most deft of strikes. His penalty sent the Spartans into raptures, as it sealed an elite 8 spot for the first time in school history. And it was a deserved win. UNCG came out on the front foot against Stanford, scoring inside 25 minutes thanks to a neat finish from Marco Afonso. But Stanford fought back, equalizing five minutes later. The rest of the contest was tight, with both sides enjoying looks on goal — but neither found the net. Eventually, penalties were needed, where substituted UNCG goalkeeper Isaac Briner saved three shots, before Hagan settled things.