The regular season is winding down this weekend with a couple of conferences even starting tournament play already.

Here is a breakdown of what to watch this weekend from the games across men’s college soccer. 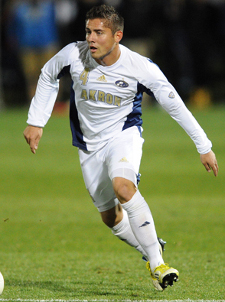 ESPN3 is broadcasting the final regular season game for the #1 Maryland Terps (14-0-2) on Thursday. Maryland travels down to Winston Salem to take on the #11 Wake Forest squad in a relatively meaningless affair.  The Terps have already clinched the ACC regular season title, and Wake Forest is only playing for ACC tournament seeding at this point. Still, it is an opportunity for fans to tune in and see the talented Wake freshmen trio of Jalen Robinson, Michael Gamble, and Collin Martin.

The bosses of the MAC, #2 Akron(m) (13-1-2) close out conference play on Saturday against Western Michigan, which might be closer than most expect. The Broncos (10-5-2) have not played the most difficult schedule this season, but they have amassed a considerable amount of wins, and kept every game competitive. Then again, it is Akron at home, so it will probably go according to plan.

In another ACC clash on ESPN3, #3 North Carolina(m) hosts #30 Boston College on Thursday. BC is battling with Wake Forest for the #3 seed in the ACC Championship, which begins on Monday. The Tar Heels have already clinched the #2 seed in the conference event.

Out on the opposite coast, #4 UCLA(m) (11-2-2) takes on Stanford and California on Thursday and Sunday, respectively. The Bruins could win the Pac-12 Championship, potentially their fourth in five years, with wins in both games. California is still fighting for an at-large bid to the NCAA Tournament, and would really benefit from spoiling UCLA’s parade.

Wrapping up the top five, #5 Connecticut(14-2-1) begins Big East Championship play on Saturday with a game against the winner of Villanova/Seton Hall. The always-lively UConn fans will attempt to make that game a nightmare for the visitors.

From 2009 to 2011, Syracuse won eight games in three seasons. So, it is a bit of a change of pace to be talking about the Orange at this part of the year, but the Big East program in New York remains in the hunt for an NCAA Tournament berth, which would be only the second appearance in program history. Syracuse last made it in 1984, before any current player was even born.

The work is not done yet for Syracuse though. With an RPI at #36 this week, the boys in orange are teetering just above the bubble. A win against the #1 team in the RPI, Notre Dame, would be a huge boost for a youthful bunch of players, led by the freshmen duo of forward Jordan Vale and goalkeeper Alex Bono, looking to make a mark on the national stage.

For a full preview of the all the Big East action, check here.