Georgetown discusses this weekend's trip to Marquette for a pivotal Big East matchup.
by J.R. Eskilson

It is already time for must-win games in college soccer.

The conference races are in full stride and the slightest slip-up could make a big difference in a few weeks when the conference tournaments kick off.

This weekend features a number of great games – check out previews and predictions from a few below. 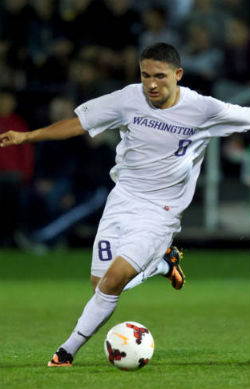 The Golden Eagles face Georgetown on Saturday in an important Big East showdown at the twilight of the season. Marquette’s recently renovated Valley Field has continued to be a fortress for Louis Bennett’s side.

From an individual aspect, the Marquette squad is highlighted by a quartet of highly regarded players. Sophomore forward C. Nortey leads the team in points with seven goals and two assists this season. Sophomore center back Axel Sjoberg has played every minute this season and donned the captain’s armband on a few occasions. Senior midfielder Bryan Ciesiulka has missed six games, but his return has been integral to the squad’s undefeated run through conference play. Goalkeeper Charlie Lyon has also been tremendous this season with 43 saves in 13 games.

Georgetown is 3-1-1 in Big East play, and nearly faces a must-win with this game if the Hoyas want to win the Big East regular season crown. Senior forward Steve Neumann continues to be the leading force for the Hoyas after scoring two goals and adding an assist in last week’s 4-1 in over Butler.

This game comes down to defense, as both sides have talent in the attack and it will be on the defenders to limit chances for both sides. Marquette is difficult to face in Milwaukee, which should give them a slight edge.

TV Game of the Week:

Perhaps thanks to a terrible Monday Night Football game or a lack of other options on television, but the Pac-12 Network caught some buzz on twitter on Monday when the Huskies hosted the Bruins in a game that ended in a 2-2 draw.

Only six days later, the programs meet for the second time this season, but this time in Westwood.

The game plan is not going to change much for either side in that short window. The change in the result will come down to the slightest changes from the individual level.

Keep an eye on Washington freshman Cristian Roldan who was solid in the first meeting, but will be playing with a bigger chip on his shoulder on Sunday with his family and friends in the crowd at Drake Stadium.

No. 2 Notre Dame vs. No. 24 Virginia: It is rare to get a week off in college soccer, but Notre Dame has had a seven-day layoff between the NC State and Virginia games – the longest break since the second week of the season for the Irish. Virginia hasn’t lost since early Sept., but the plethora of draws has not been beneficial for Cavaliers ACC standing. The Irish are great at home and a bit more experienced than UVA in these situations.

No. 15 Penn State vs. No. 17 Northwestern: The Nittany Lions have raced out of the gate in the Big Ten with four wins in four games. The talented Wildcats are chasing, but with only three games remaining, this is a must-win game for a shot at taking the top seed into the Big Ten Tournament.

No. 25 Wisconsin vs. No. 19 Michigan State: The Badgers and Spartans are hoping that Penn State trips up to open the door for a late surge. Wisconsin’s four-game winning streak was snapped last week at Michigan. However, the Badgers’ lengthy home winning streak is still alive – 10 games and counting.

Cal Poly vs. No. 18 UC Santa Barbara: The Gauchos will clinch the top spot in the Big West North Division on Friday with a win over the Mustangs. That is a huge deal considering where UCSB was last season and what the Gauchos lost during summer (Ema Boateng).

VCU vs. La Salle: The battle for the A10 is in the forefront this weekend when VCU hosts La Salle. Both sides are undefeated in conference play heading into the clash. VCU is undefeated in its last five including two wins at home. La Salle has only won once on the road this season.