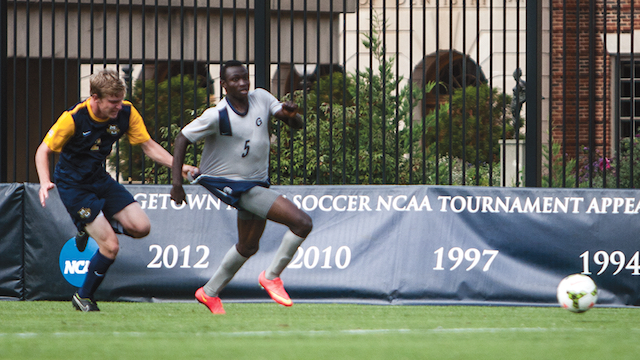 The Big East regular season title is going to be decided on Thursday. The colossal battle between two Top 10 teams will be all of the talk this week as Creighton heads to Georgetown with eyes on taking over the top spot in the conference again.

Outside of that game, there are a couple of other conference games that are meaningful for NCAA tournament berths this weekend.

The game of the weekend kicks off on Thursday. The Big East showdown between the two best tams in the conference offers plenty for college soccer fans to be excited about. Creighton is looking to return to the top of the conference after suffering a loss to Xavier last week. Georgetown is trying to keep its perfect conference record intact in the final regular season game of the season. A big performances from Fabian Herbers in this game could seal the Player of the Year award for the Creighton junior.

Dartmouth can clinch the Ivy League title this weekend with a result against Cornell. The Big Green is perfect in the conference so far and enters conference play this weekend with a five-point lead. The talented young core of the team have put together a strong season with freshmen Amadu Kunateh and Eduvie Ikoba leading the group in scoring with three goals apiece.

San Diego will clinch the WCC on Friday with a win against San Francisco. The Toreros have been dominant in league play this season and have a three-point lead at the top of the table with only two games left on the schedule. Senior forward Keegan Smith leads the way for San Diego with seven goals in 16 appearances.

UCLA has been featured prominently in this section over the past month as the most talented team in Division I went from being on the outside of the NCAA Tournament to firmly being in the running for an at-large spot. This week’s game has the attention on UCLA’s opponent. Washington has a shot at claiming a share of the Pac-12 title, but the Huskies need to win out. With games against San Diego State, UCLA, and Oregon State on the schedule, this is going to be a challenging task for coach Clark and his squad. If Washington comes up short, Stanford will win the title and won’t have to share the crown with anyone.