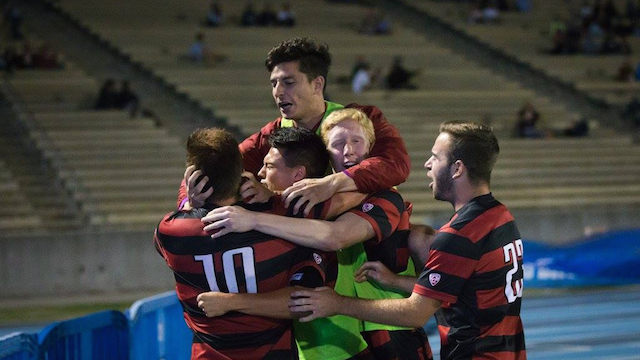 Who will win the Atlantic Coast Conference regular season title? The hardware will be decided this weekend as the campaign comes down to the final weekend of play. Heading into Friday’s games, No. 2 Wake Forest and No. 8 Louisville are even on 16 points in the Atlantic Division. No one can catch the two front runners in the Atlantic Division. No. 5 North Carolina already claimed the top spot in the Coastal Division with 16 points from seven games. Wake Forest, Louisville, and North Carolina are locked into the top three spots for the ACC Championship, which begins play on Nov. 2. The order of those three plus fourth spot, which is also given a home game in the quarterfinals, is up for grabs this weekend.

Wake Forest (12-2-2, 5-1-1) hits the road to take on No. 7 Syracuse (10-3-2, 3-2-2) on Friday. The Orange have not given up a goal at home in ACC play this season. Wake Forest probably needs three points from the game in order to keep dreams alive of a regular season crown. Syracuse, 11 points in ACC play, probably needs a win to move into the fourth spot in the ACC standings and secure that bye and home game in the quarterfinal round.

Louisville (11-3-2, 5-1-1) hosts No. 4 Clemson (10-2-4, 3-1-3) on Friday in another top ten battle from ACC play. Clemson is in fourth place in the overall ACC standings heading into the weekend with 12 points, but it’ll be difficult for the Tigers to stay there. Louisville has a plus seven goal differential in conference games at home this season. The Cardinals have only let in one goal in 270 minutes of play.

The final game of consequence for the top four seeds in the ACC is No. 9 Notre Dame (10-5-1, 3-3-1) hosting North Carolina (11-2-2, 5-1-1) on Friday. The Irish looked like the favorite in the ACC through the first month of the season, but a rough run of form recently has Notre Dame sitting in sixth place heading into the final game. The Irish have lost their last four games including Monday’s game at home to Michigan State. Notre Dame really needs a positive result on Friday in order to start building back some of that confidence they had through September.

In the Pac-12, Jeremy Gunn is on the verge of winning the conference for the third consecutive season, which should be enough to award him Coach of the Year honors. Prior to Gunn’s arrival in Palo Alto, Stanford had only one the Pac-12 once! With the departures of Jordan Morris and Brandon Vincent, Stanford was expected to struggle. And the Cardinal did. Stanford started the season winless in its first four games. But Gunn had the group in the right place for conference play and now Stanford (9-2-4, 6-0-1) closes out the campaign with three games in the Bay Area. This weekend, Stanford hosts Oregon State (4-6-3, 0-3-2) on Thursday and Washington (10-4, 3-2) on Sunday. A win for Stanford over Oregon State on Thursday and a a win for California over Washington would clinch the regular season title for the Cardinal with two games to spare. Otherwise, the conference title could be decided on Sunday when the Huskies take on the Cardinal.