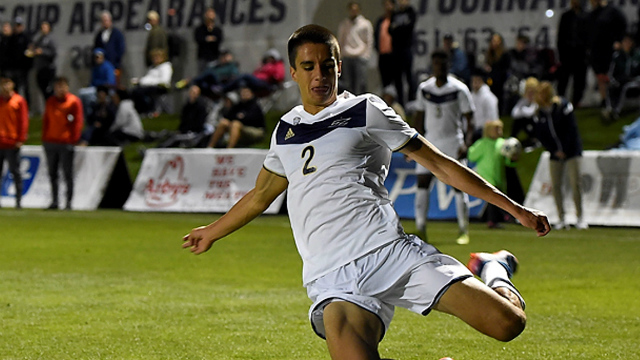 The next few days of Division I men’s soccer action features another huge round of conference games in the ACC, Big East, Big Ten and MAC.

An early kick off on Friday afternoon sees Butler visit the Hilltop, as the Hoyas 2017 revival picks up pace in conference play. If Georgetown wants to keep pace with the Bulldogs in the standings, a win is a must even at this early juncture of the season. Georgetown’s only loss of the season came at the hands of Xavier, away from home. Improvement at both ends of the field has driven this year’s bounce-back, as Achara’s managed to score five times in six appearances – once again battling injuries – while an improve defensive group has conceded just seven times. The sophomore duo of Brandon Guhl and Lewis Suddick have been the key for Butler in the final third, as they’ve combined for 10 goals so far on the season. A win for the home side would crack the Big East race wide open, with two other teams sitting at 2-1 along with Georgetown.

Undefeated through its first 11 games of the season, Maryland faces its most difficult two-game stretch of the season, playing at Ohio State on Friday before clashing with a solid Wisconsin side the following week. While Gordon Wild hasn’t found the back of the net at the same prodigious rate of a year ago, an improved Maryland back line has conceded just five times through the opening stretch. Senior Jake Rozhansky is also in the middle of something of a breakout campaign, solidifying his pro prospects. Ohio State’s done just enough to start strong this season, as Abdi Mohammed’s three goals and four assists have made him an integral part of his team’s attack. Goalkeeper Parker Siegfried has shutouts in seven of the team’s 10 games so far. The Buckeyes are looking for a bounce back after losing 5-1 last weekend on the road at Michigan State.

The game of the weekend is arguably the biggest clash of the season to date. Wake Forest hits the road to face high-flying North Carolina, as the unstoppable force meets the immovable object. The Tar Heels, buoyed by one of college soccer’s best players in Cameron Lindley, are a tough package for anyone in the nation to slow down. Wake Forest, meanwhile, have attacking talisman Jon Bakero in the form of his life, scoring goals while also setting up and creating them. U.S. Soccer have done Wake no favor by calling up freshman star Brandon Servania into a U.S. U18 MNT camp, leaving a notable vacancy that UNC is certain to exploit. Regardless of the winner, this game serves as a potential ACC tournament final or even a College Cup preview.

It’s as important of a MAC opener for both Akron and Western Michigan in quite some time, as the Zips hit the road for a big test. Head coach Jared Embick’s side is gutting it out through a few injuries to key players; senior striker Sam Gainford missed the past two games, including a 1-0 road win at Syracuse. Regardless, momentum is on Akron’s side, as they are unbeaten in seven straight games. Western Michigan, while losing mid-week against Michigan State – who Akron beat 4-1 last week in Ohio – are led by Brandon Bye and Jay McIntosh, and certainly can give the injury-hit Zips problems at the back.

If ever the Cal Bears can put together a win against their local rivals, this might be it. Winners of six in a row, the hosts have the entire week off to prepare for the Cardinal. Goalkeeper Drake Callender has proven to be more than an adequate replacement for the early departure of Jonathan Klinsmann, while Shinya Kadono has stepped up to score timely goals. Big games are needed from Paul Salcedo and Jose Carrera-Garcia for the Bears to halt the Bruins. While the two-time defending champs have suffered a couple of early blips, the recipe for success remains the same: tough at the back with Tomas Hilliard-Arce, and difficult to handle up front through Foster Langsdorf. A Cal win would be significant not just for the team’s confidence, but for the Pac-12 race as well.