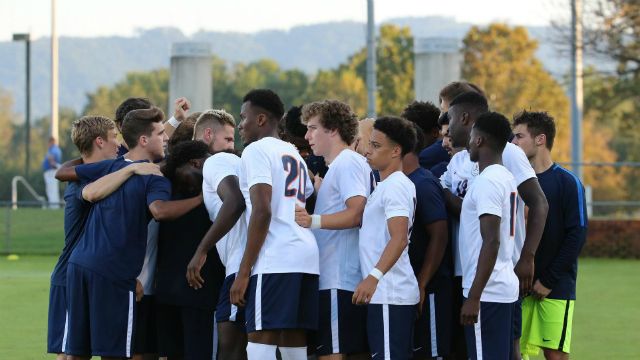 When it comes to locking in an at-large bid, both teams need to win when they take the field Friday night in Madison. There is time, and a deep run for either in the Big Ten tournament would go a long way. The Wolverines can create plenty of issues for the Badger back line, as Jack Hallahan and Umar Farouk Osman are enjoying strong seasons. Given the caliber of talent that Wisconsin lost from last year’s NCAA tournament team, they could be pretty happy where they sit with three games left in the regular season. Last weekend’s loss at Penn State was certainly a hammer blow, as a win there would’ve put them at just one loss in the Big Ten. Goals have been a bit hard to come by, as freshman Andrew Akindele leads the team in goals and assists with just three apiece. Finding other candidates to create or finish chances would go a long way in leading the Badgers to a much-needed victory.

Easily the game of the weekend, one of the nation’s best attacks lines up against Virginia’s suffocating back line. There’s potential for either one of these teams to nab the No. 1 overall seed in the NCAA tournament, and the winner here could have the inside track. While the Demon Deacons do show cracks at the back, the matchup of their attacking talent – whether it’s Bruno Lapa, Omir Fernandez or Aristotle Zarris – against UVA’s defenders is going to be fascinating. Aboubacar Keita and Prosper Figbe have prospered in their respective roles, and Colin Shutler provides safe hands in goal. Don’t expect a ton of goals in this one, but it should be a tactical battle to remember.

NCAA tournament and hosting chances are arguably the most significant stakes of this Saturday matchup, as the Orange fly down to Raleigh. Both teams boast some fun, attacking talent, as the Orange are led by freshman Ryan Raposo and sophomore Tajon Buchanan in the final third, while senior defender Kamal Miller locks things down at the back. Poking and prodding that defense is NC State’s duo of Manny Perez and David Loera. The Wolfpack were flying high after defeating UNC 1-0 last Friday, only to come out flat and drop a 3-0 non-conference game to an underrated UNC Wilmington side. Goals could surely flow in this one, if both teams fly out of the games.

After a three-game swing on the road, the Bluejays return to Fortress Morrison, where they’ll play three of their final four games left on the schedule. The Big East title isn’t up for grabs in this one, but the Friars are Creighton’s closest competition; a win for the hosts would boost their lead to at least five points, and six if Georgetown lose or draw in their matchup against Seton Hall. Akeed Ward’s leadership at the back has been a big part of Creighton’s success, while Sven Koenig’s the primary goal-scoring threat. Providence has left behind a disappointing non-conference run to win four of its first five league matches. Three of the four have come in shutouts wins and making plays in front of goal is going to be crucial for a Providence team that’s conceded more goals (15) than it’s scored this season (14). Freshman Ramzi Qawasmy has logged nearly every minute and he will be one of several crucial individuals for the visitors.

A three-team pack has emerged at the top of the Atlantic 10, with VCU equal on points with Davidson and Rhode Island a point behind. The Rams, which had Wednesday night off and will be fresh when the Patriots arrive for Saturday’s encounter, are certainly favorites with a talented side led by midfielder Siad Haji. George Mason can be hit or miss, as they scored four times in a 4-3 win on Wednesday night against Saint Joseph’s. Between Tunde Akinlosotu, Grant Robinson and Colin Brezniak, there is attacking talent on the roster that can turn this into a high-scoring clash and provide Saturday night entertainment.