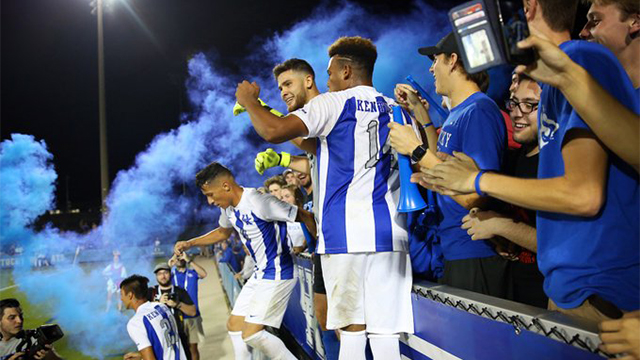 The Conference USA regular season is up for grabs on Friday night, as the Monarchs travel to Kentucky for what should be the game of the week. The Wildcats’ dream season has been driven by the dynamic offensive duo of JJ Williams and Kalil ElMedkhar. Kentucky has locked up an at-large bid, and with a win, can secure the conference crown on home turf. Old Dominion is no pushover and count on the offensive punch from Max Wilschrey and Niko Klosterhalfen. Not only does UK hold the edge because they are the hosts, but they have the better defensive record, conceding just eight times this season as opposed to ODU’s 19. Regardless of who is the favorite, there’s potential for an exciting and enthralling match.

Each of the hosts in the Big Ten conference matchups enter as clear favorites, save for Maryland’s trip to Michigan State. Both the Spartans and Terps have struggled in the final third at times this season, although Maryland picked things up during the Big Ten slate, even if they were shutout by MSU earlier this season in College Park. Hosting this game certainly gives Spartans the edge, although it’s not going to be easy. As opposed to last year, the Terps' attack has been trending up despite a loss on the road to Michigan last weekend.

Rutgers somewhat steadied the ship from a rough start to win a pair of conference games and need Jordan Hall to come up big time to give them a shot at the upset win against Wisconsin. The Badgers are right on the precipice of an at-large bid. A run here, starting with a win on Sunday, would be a step closer towards that. With a 0-5-2 record on the road, Penn State needs to get its first victory to keep the season alive when they visit Ann Arbor against a Wolverine side that's looking to bolster their hopes of an at-large bid.

The ACC tournament continues this Sunday, at campus sites around the country. Wednesday’s matchups saw NC State, Notre Dame, Pittsburgh and Virginia Tech advance. The win was most important for the Panthers, which need to defeat Duke on Sunday and inch closer to the .500 mark and a potential NCAA tournament spot. Edward Kizza’s the player to watch once again, as he’ll look to replicate his two-goal performance against Virginia on Wednesday.

NC State’s trip to Winston-Salem has potential. While Wake Forest cruised to a 3-0 win in the regular season matchup, the Wolfpack has the weapons to give Wake’s defense some trouble. Specifically, David Loera and AJ Allen Seals are two names that come to mind, even if Manny Perez won’t be available due to U20 duty.

The No. 4 vs. 5 seed matchup, Notre Dame at Louisville, is anyone’s game. The Irish beat the Cardinals in South Bend at the start of October, and both teams are tough to break down. A lack of elite finisher has held Louisville back a bit this season, as they have the quality in the midfield and at the back to control games. This is a game that can certainly come down to set pieces.