Week one from men’s Division I featured a handful of upsets. Will week two be the same?

No. 1 Connecticut returns to the field on Friday night for a fixture against Boston University. The Huskies were hardly challenged in their opener against Saint Francis with goalkeeper Andre Blake only making one save. No. 2 New Mexico hits the road for games against VCU and Georgetown. The latter is featured below in the TDS Game of the Week. All listed times are eastern. 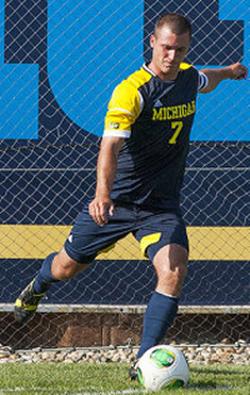 The Hoyas return to Shaw Field this week for a pair of games after opening the season with a split in Northern California against California and Stanford. The 2012 national finalist will be challenged in the home opener on Friday with West Virginia coming to town. The Mountaineers are only the appetizer though, as the blitzing attack of the Lobos will be close in tow for an early season showdown on Sunday.

New Mexico crushed Villanova 7-2 last week in the Lobos opening game, which put to bed any fear of the Conference USA program struggling to score in 2013 after the departure of Blake Smith and Devon Sandoval. James Rogers and Michael Calderon look ready to take the spotlight and light up the score board this fall for Jeremy Fishbein’s squad.

Expect this game to feature plenty of offense from both teams. Steve Neumann and Brandon Allen are as potent a two-some as you will find in college soccer. It showed against Stanford on Sunday when Neumann scored both goals (one with an assist from Allen) on the way to a 2-0 win. New Mexico offers a bit more of a test with senior Kyle Venter leading the defense for the Lobos.

On the other end, freshman Joshua Yaro will have his hands full with the New Mexico attack. The center back has the athleticism to clean up mistakes by his cohorts around the field, and that asset will be needed against the Lobos.

With both the Georgetown-New Mexico and Notre Dame-North Carolina games kicking off at the same time, you’ll have a choice to make.

The Irish did well over opening weekend with a win over SMU and a scoreless draw against the stout Bruins of UCLA. North Carolina was slow out of the gate, as the Tar Heels needed 103 minutes to break down the Monmouth defense and score the winner in the opener. The Heels came out firing on Monday though with four goals against No. 11 Coastal Carolina.

SMU transfer Tyler Engel is the one to watch for the Tar Heels after scoring a goal in both games to start the season.

NSCAAtv.com Game of the Week:

The Terps are trying to bounce back after a disappointing start to the season with a draw against Stanford and a loss against California. A home game and a national audience await on Friday when the ACC clash against Duke is broadcast on NSCAAtv.

Keep an eye on the freshmen for both sides, as Suliaman Dainkeh and Alex Crognale should start again at center back for Maryland against Duke’s newcomer Brody Huitema.

Tyler Arnone’s absence (red card) takes some bite out of the Michigan-South Florida showdown on Friday, but there are still plenty of MLS prospects for scouts to keep an eye on in Ann Arbor.

Pereira will be going against a stacked Bulls midfield led by former Tyler Junior College star Samuel Hosseini. If the Brazilian can still generate chances against a crowded, athletic Bulls midfield and defense, the scouts will definitely take notice.