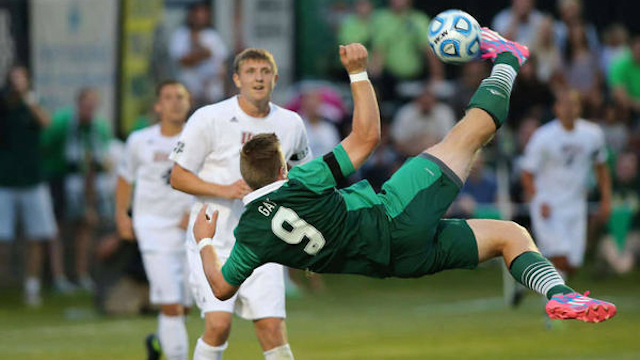 The first three weeks of the men’s Division I college soccer season have been filled with upsets. There are a number of highly ranked teams with tough match-ups this weekend. Will the trend continue?

Take a look at the games to watch and the players to watch from this weekend’s action below.

The game of the week does not look quiet as good after Notre Dame’s loss to Xavier on Tuesday. The Irish were a bit unlucky in that game, but it showed that the Notre Dame attack can be frustrated with an organized group and a clear game plan. North Carolina, typically, brings that approach to every game. The Tar Heels have only let two goals through four home games this season. Expect a close contest on Friday between the two top ranked teams in the ACC.

The Cavaliers main unbeaten on the season following a 2-0 win over James Madison on Tuesday. The schedule continues to get more difficult for the defending national champion. The Wolfpack comes to town on Friday for an ACC showdown. A solid start to the season has NC State looking like a possible contender in the conference, but the road game against Virginia will be a big test for the Wolfpack.

Brown tries to continue its perfect start to the season with games against Georgia State and Clemson over the weekend. The Ivy League squad is on the road to take on the ACC group on Sunday. Brown has been solid defensively with only one goal conceded in the first three games, which was against the daunting Providence strike force. If Brown can pick up a result against Clemson, the Ivy League side will shoot up the rankings on Monday.

Denver has been one of the surprises of the college season so far. With a new coaching staff in place, the Pioneers have looked sharp through the first three weeks of the season. This weekend is the big text though. Denver hits the road for a game at Saint Louis on Friday and then returns home for a contest against Utah Valley. Denver’s Reagan Dunk has been pulling the strings in the attack with four assists already. He’ll be one to watch this weekend if Denver is able to keep it’s undefeated season alive.

UNC Wilmington and its 198-minute shutout streak open conference play on Saturday with a game against Hofstra. The Seahawks are flying high after a 3-0 win over Duke on Tuesday. On Saturday, the Seahawks face another nationally ranked opponent in Hofstra. Can Hofstra slow down the potent UNC Wilmington attack or will the Seahawks keep churning along with an undefeated record?

Rhys Williams, Columbia - The junior midfielder has been the key piece for the Lions so far this season. Williams was recently named the Ivy League Player of the Week. The Lions will be counting on him to keep the undefeated season alive with a game against Delaware on Saturday.

Matthew Jegier, Elon - The redshirt freshman goalkeeper has only let in two goals over the course of his first six starts - all wins. Geiger is one of three players on the Elon squad to play every minute this season. Elon opens conference play this weekend with a home game against Drexel on Friday night.

Jorge Gomez Sanchez, Temple - In his first season in college soccer, Jorge Gomez Sanchez has already found the back of the net six times while leading the Temple Owls to a 4-0-1 record through Tuesday. Sanchez and Temple take on Penn on Sunday as the squad gears up for its conference opener next week.