Can anyone slow down the #1 Maryland Terrapins? Having won seven games on the trot, the Terps boast a lethal offense, second best in the country, and are heading on the road to take on the College of Charleston and keep the streak alive. Patrick Mullins (5 goals, 6 assists) is the leader up front, one of four players with at least 4 tallies on the season.

One of the showdowns of the season in the Big East looms on the weekend, as #2 Connecticut hosts #12 Notre Dame, who recently saw their unbeaten season end last weekend against Louisville. It’s a big test for both sides, especially for the Huskies, who then face a tricky trip to Georgetown mid-week as the Big East schedule ramps up.

Despite not playing at the same level of last year, #3 North Carolinais still doing enough to keep the wins rolling, with just a single lost through the first eight games of the season. That will be put to the test in earnest with a rivalry matchup Friday night against Duke, who have enjoyed their fair share of early ups and downs on the season to this point. 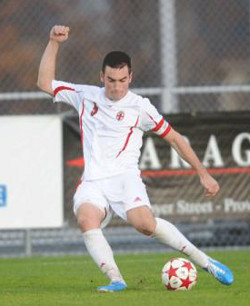 Mid-American Conference play continues this weekend for #4 Akron as they’ll host Buffalo on Saturday, looking to extend a two-game winning streak, looking to send off Caleb Porter to the pro ranks in style.

Big West action begins with a bang for #5 UC Santa Barbara this weekend, as the UCSB hits the road to take on UC Riverside and Cal State Fullteron(m). There’s no question that their in-conference rivals will hope to hand the Gauchos their first loss of the season, and it will be up to Tim Vom Steeg’s side to start navigating through the challenges of the Big West schedule.

One team (Notre Dame) enters this game fresh off its first loss of the season, while the other is riding a four-game winning streak – the host Huskies. Backed by the outstanding Andre Blake in goal, UConn hasn’t conceded a goal in four games, and are led up front by midfielder Carlos Alvarez and forward Mamadou Diouf. The Irish are out to prove that their hot start is no fluke, not to mention recovering from an opening Big East loss against Louisville last weekend.

Perhaps the best team in the country few are talking about is Cornell. The Big Red has won its first eight games of the season so far, and while the schedule was rather kind to the team over that stretch, the goal-scoring antics of Daniel Haber (13 goals, 4 assist so far on the year) have obviously played a massive role. Now, the team has to prove it can do it against Ivy League competition, with Pennsylvania(m) first up on the docket this coming Saturday.

1. Much has been said so far about #15 Old Dominion and the team’s chance to shine on the national level this year. However, the Monarchs dropped their CAA opener last weekend on the road to Drexel. What makes this Friday’s matchup against #38 George Mason compelling has been the early success of the Patriots, who are looking to stake a surprise claim on a CAA title by defeating the Monarchs on their home turf. The game can be seen on Fox Soccer Channel this weekend.

2. As previously mentioned, Ivy League action starts this weekend, and along with Cornell looking to make a stand, Brown has enjoyed a strong start to the season (7-1-0). The Bears are fresh off an impressive West Coast trip to Seattle, where they beat both Washington and Portland. It’s going to be anyone’s game though as all eight Ivy League teams square off against each other this weekend.

3. Which ACC struggler can right the ship this weekend? Neither #34 Boston College nor #31 NC State has managed a win in the early days of the conference season. The two sides meet this weekend up in Boston, with both badly in need of three valuable points to try and climb the ladder in the ever-competitive ACC.