Men’s preview: The battle for California Depending on where you live, there’s a big college soccer game this weekend. If you live in ACC country, all the talk is about Maryland traveling to take on North Carolina. If you enjoy the great shores of the Great Lakes, the battle between Michigan and Marquette is likely on the mind. Or if you head west, you’re thinking about tortillas flying (or not flying) when UCLA hosts UC Santa Barbara.

The third weekend of the men’s college soccer season offers a big slate of games with fascinating story lines. 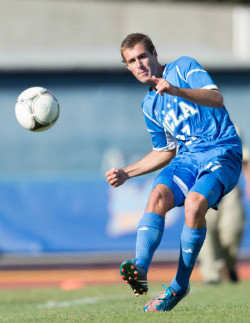 The Gauchos-Bruins rivalry is like a playground fight beyond two kids in grade school. The sandbox is only so big and they’re going to bump heads from time to time.

Last year, the two programs battled to a 1-1 draw in front of 7,542 fans at Harder Stadium in Goleta, California. This year, the game heads to Drake Stadium in Westwood.

Both teams are coming off home losses, which makes a win in this game even more meaningful. UCLA will be without center back Michael Amick, who picked up a red card against Cal Poly last week. Although senior Joe Sofia returns to the lineup after sitting out his red card suspension against the Mustangs.

Gauchos head coach Tim Vom Steeg returns to the sideline after sitting out a red card of his own last week. The Gauchos appear relatively healthy heading into the clash after senior midfielder Fifi Baiden returned to the squad last week against Gonzaga.

The biggest question for both sides heading into the game is in the net. Gauchos junior goalkeeper Austin Mansker only made one save last week in the 2-0 loss to Gonzaga. Freshman Josh McNeely is knocking pretty loudly on the door already to take over the top spot on the UCSB depth chart.

Meanwhile, UCLA goalkeeper Earl Edwards let in three goals on six shots last week. It not Edwards’ fault, but the Bruins went into the season with two goalkeepers already on the mind thanks to Juan Cervantes performance last season as a freshman. Another lopsided home loss will likely see plenty of shake-up for the Bruins.

Game of the Week Part 2:

Not to be out done by the California showdown, the ACC clash between the Tar Heels and Terps will be on the mind for many on the opposite coast. Maryland supporters are taking three buses down to North Carolina to turn the Tar Heels’ home field advantage into a Maryland party on the road.

Maryland has struggled this season with only one win from the first four games. An inexperienced defense has given up 10 goals during that stretch and the schedule only looks tougher from here.

North Carolina is coming off a 1-1 draw against Notre Dame where transfer Tyler Engel scored his third goal of the season. Engel is the one to watch for Maryland, as he has added a bite to the attack in the absence of the early departure by Danny Garcia (FC Dallas).

This game can be viewed on the New Mexico website on Sunday, and it will more than likely be worth your time. The Matadors have a strong side this season, and rolled out to a perfect record to start the campaign. A trip to New Mexico will be a huge test, as the Lobos have one of the biggest home field advantages in the country.

Kafari, the senior defensive midfielder for New Mexico, will be tasked with stopping Northridge’s creativity, which flows through a few players but Benavides is the main threat. Also worth watching is Northridge’s Sagi Lev-Ari, a junior, against MLS-bound center back Kyle Venter.