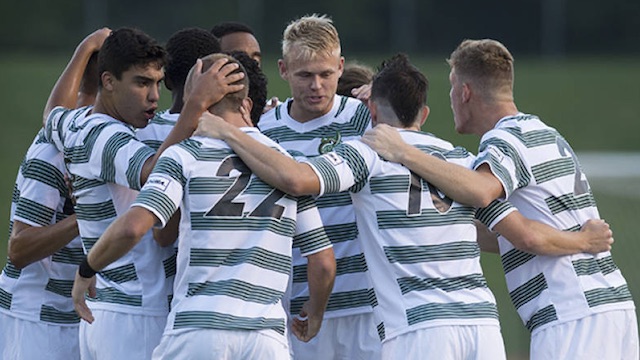 There was some intrigue within the CAA last year after a riotous tourney season. UNCW, Delaware and Hofstra were in a dead heat for the conference’s top team, but somehow Northeastern and James Madison made up the tourney title game. JMU took the automatic bid, Wilmington grabbed the at-large nod and everyone else was peering in from the outside. This conference doesn’t lack for motivation in 2015.

Talk of this conference this season has to start with Delaware. The Blue Hens bring back seven starters from a 13-win team, none more decorated than Guillermo Delgado, the league’s best player. Surrounded as he is by midfielders Joe Dipre and Jaime Martinez, Delaware can score on anybody. If the defense can hold firm, Delaware should make good on its tourney snub from last year.

It’s hard out here for defending champs. Despite winning the conference tourney in 2014, James Madison was picked to finish fourth under new management. Coach Tom Foley has talent available to him, but the bulk of it is concentrated defensively. Bjarki Aðalsteinsson and keeper Kyle Morton should keep things tight at the back, which is good because no returning forward scored more than five goals last year. It’ll have to be a concerted team effort for a repeat.

Elsewhere, Hofstra and Wilmington look posed to give Delaware a run again. Hofstra’s Joseph Holland was the league’s assist king with nine last year, and Wilmington’s Sean Melvin, a keeper in the Vancouver Whitecaps system, is probably the best netminder in the league as just a junior. With complementary pieces surrounding them, both should make the top three a similar affair to what it was last year.

The conference’s bottom five looks like a jumble, but look for Northeastern to build on its success from last year. The emergence of Haitian wonderkid Frantzdy Pierrot as a freshman last year should make them dangerous.

The battle between Charlotte and Kentucky for control of Conference USA this year should be a real treat. Charlotte benefitted from the breakout of forward Kyle Parker, who rode his nine goals and seven assists to a Hermann Trophy semifinalist nod in 2014. With the return of fellow first-team CUSAers Biko-Bradnock Brennan and Brandt Bronico, the 49ers aren’t just a clear conference favorite. They could make some noise in the NCAA tourney.

First they’ll have to get past Kentucky. The Wildcats boast arguably the best keeper in the country in Callum Irving, and the return of juniors Napo Matsoso and Jordan Wilson makes this team dangerous. Kentucky is a defense-first team, while Charlotte tends to get by on its attacking exploits. When the two meet this year, it should be one heck of a show.

Don’t overlook the rest of the league, though. New Mexico has quality back in the midfield in Niko Hansen and Chris Wehan, while UAB and Old Dominion both look like top-half finishers based on their returning talent. Even teams in the lower half have upset-enabled rosters. That said, South Carolina has to find a way to replace Mikkel Knudsen, and both Marshall and FAU look to be in rebuilding mode.

Florida International could be in for a most improved award in 2015. A massive 11-man junior class leads this side into the season with heightened hopes after a second-to-last finish last season. They’ll have to cover for the loss of Quentin Albrecht, but there’s a lot of quality back, led by leading assist man Daniel Gonzalez. Don’t be surprised to see this team break .500 this year.

You might’ve been excused if you didn’t predict the Horizon League would produce the nation’s leading assist man in 2014 and a separate team to make the second round of the NCAA tourney. But here we are. Eric Lynch compiled more assists than anybody in the country last year, and Oakland shocked the country by downing Kentucky in the first round of the dance and then pushing Michigan State in a finger-biting 1-0 loss. Unsurprisingly, 2015 should be interesting.

Lynch is still only a junior, so Wright State will benefit from his unnaturally good vision for the next two years. They’ll have some pieces to replace, but the core of that 10-win team returns, and Lynch still has Peguy Ngatcha to pick out in the attack. Detroit and its staunch defense came closest to taking down Oakland last year, and there’s good and bad news there. Detroit loses a hearty chunk of the defense that made it so unbreakable at times last year, but the return of names like Spiro Pliakos and Nathan Steinwascher should launch them back into the mix this year.

Oakland, though, was the talk of the town last year, but coach Eric Pogue largely won the league’s coach of the year honor because he did it without a single orbital star. Joey Tinnion came close, but he’s gone, leaving Matt Dudley to run the show in the midfield. Wes Mink came a long way starting between the posts as a freshman last year, but he won’t have security blanket Cody Archibald in front of him this time around. One thing’s for certain: this conference is anything but assured at the top.

Elsewhere, Milwaukee might be down a peg because it has to replace defender Luke Goodnetter and the fantastic Laurie Bell, who ran the show in the midfield, as does Valparaiso with Zev Taublieb. That could open the door for the likes of Cleveland State and UIC, which showed some encouraging if inconsistent flashes last season. New program Northern Kentucky is also in the mix after jumping ship from the Atlantic Sun into the more regionally-friendly Horizon League earlier this season.