One of the best conference races in all of men’s college soccer appears to be going down in the Big East.

With nine teams currently in the TopDrawerSoccer.com Tournament Ranking, there is plenty of quality on display, with programs like #7 Notre Dame, #13 Georgetown, #4 Marquette and #5 Connecticut all faring well through the first half of the season.

But it’s been the Golden Eagles who stand out the tallest at the moment, especially on the heels of Marquette’s 3-2 win at home against a previously undefeated Connecticut side.

Thanks to a pair of goals from senior Andy Huftalin, the Golden Eagles extended their winning streak to a national best (on the men’s side) 11 games in a row, and sit atop the Blue Division standings at the moment. 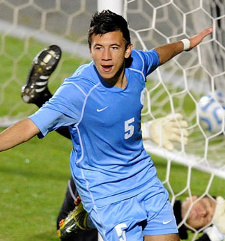 A pair of teams chasing both the Huskies and Marquette also faced off on the weekend, as Notre Dame easily handled the challenge from visiting Georgetown, winning 3-0. Senior forward Ryan Finley’s brace put the game out of reach in the second half.

"This was a great win and a great advertisement for college soccer," Irish head coach Bobby Clark said in a press release. "It was two very, very good teams going at it and it was an exciting match.”

Not to be outdone, #24 Louisville jumped to the top spot in the Red Division, with a 2-1 come-from-behind win over Syracuse on the road.

#1 Maryland and #2 North Carolina are both at the top of the ACC standings as well as the national rankings. And while the Tar Heels may be in first place in the conference by virtue of playing one more game than the Terps (a draw, so a one point lead), both teams look capable of winning an ACC championship this season.

Neither team was able to secure an edge this past weekend, as Maryland defeated rivals Virginia 1-0, while North Carolina topped Clemson 2-0. The two sides meet in College Park on October 19, and it could decide the regular season ACC title.

Junior forward Patrick Mullins was the difference maker for the Terps this past weekend, scoring the decisive goal in the team’s sixth shutout of the season.

"I think it was a great win. It was typical of a Maryland-Virginia game, intense and competitive," Terps head coach Sasho Cirovski said in a release. "I was really pleased with our overall defending. I think that was probably our most complete defensive effort of the year. To hold Virginia to so few chances with all the quality attacking players they have I thought was a credit to our team."

Meanwhile, the Tar Heels did just enough to grab a precious road win against the Tigers, in a game that featured a golazo off the boot of sophomore midfielder Mikey Lopez.

Bennett heats up for Coastal Carolina

It hasn’t been the same explosive, high-scoring season for #12 Coastal Carolina’s Ashton Bennett, a year after scoring 23 goals in the college season. Rather, there have been plenty of ups and downs on an individual level, but it looks like he’s finally heating up.

In a 3-0 win against UNC Ashville(m), the pacey forward found the back of the net twice, making it three goals in the past two games, as the Chanticleers remained unbeaten in the Big South. Bennett now has seven tallies on the year, but more important, his CCU side seems poised to make some noise this postseason.

Sophomore forward Eriq Zavaleta might have played as a defender at the youth level, but as a striker for #11 Indiana, he continues to be extremely dangerous.

The former Chivas USA Academy players scored twice over the weekend as Indiana won a third straight game in the Big 10, a 2-0 defeat of Wisconsin.

"This was a really good result tonight," head coach Todd Yeagley said in a press release. "The performance was excellent. Our ball movement and creating chances was there and our energy and mindset from the start was fantastic. We were able to physically impose ourselves while also playing some great soccer."

With two goals, Zavaleta now has four tallies in his last two games, netting himself co-Player of the Week honors.

VCU opens A10 schedule in style

After making the quick jump to the Atlantic 10, it was hard to know how exactly life in a new conference might turn out for #29 VCU.

It couldn’t have gone better for the Rams in the opening weekend of A10 action, winning two games against new conference opponents, including an impressive 4-1 defeat of #26 Charlotte.

The follow-up game on Sunday saw the Rams win 3-0 over George Washington, despite not playing their best.

“I was pleased with getting the three points obviously, but left the field not feeling great about our performance toward the end of the game,” head coach Dave Giffard said in a release. “I was very pleased with our approach to the warm-up and the beginning of the game, but would like to see us sharper through the final whistle. It's nice though to be able to learn those lessons when you win if you can though. Now we look ahead to a tough weekend of travel to St. Louis and Indianapolis against two of the best teams in the A-10.”