Steve Neumann’s goal tally might not reach the same number as past seasons, but there’s no questioning just how important the junior forward is to #11 Georgetown.

The forward, who uses his soccer brain to find spaces and clever flicks to set up teammates, played the role of match-winner over the weekend, scoring the winning goal and setting up Georgetown’s other goal of the game in a 2-1 win at home for the Hoyas over #4 Marquette. 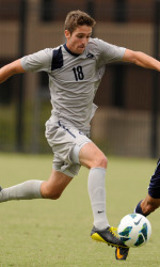 "Marquette is a very good team and it's a tribute to our league that we have so many legitimate top 10 teams," Georgetown head coach Brian Wiese said in a release. "I thought we played a very disciplined game today, but they made it hard on us. The older guys stepped up and really managed the game."

The win is particularly huge for Georgetown as it keeps them in the running for a possible top two finish in the Blue Division, where four teams are currently all tied with nine points apiece.

Maryland, North Carolina pick up wins ahead of clash

Much is at stake this coming week in ACC play, with #1 Maryland set to host #2 North Carolina this Friday, and neither team could overlook competition from this past weekend in the run up.

And neither did – the Terps took care of business on the road against ACC rivals Duke, winning 2-1, while the Tar Heels made easy work of the College of Charleston in a 3-0 victory.

The best news of the weekend came for North Carolina, as Robbie Lovejoy made his return from offseason surgery and accounted for all three goals. His return is huge for a Tar Heel offense that has been modest at best throughout the week.

Meanwhile, Maryland has a non-conference tilt of its own to take care of on Tuesday night when they host Colgate.

When it comes to conference play in the Mid-American, #3 Akron is simply lights out.

Their dominance continued over the weekend thanks to a fairly casual 2-0 road win against Northern Illinois. A goal from left back Phil Fives in the game’s first two minutes set the tone on the day, as the Zips won their sixth game in a row.

During that stretch, Akron have been arguably the best team in the country, outscoring opponents 20-0. The last time they conceded a goal was back on September 9 in a 3-1 loss against Notre Dame.

In 2011, the Orangemen were cellar-dwellers in the Big East.

What a difference a year makes for #37 Syracuse.

A huge road win against South Florida notched on Saturday brought this year’s win total to 10 overall on the season, and a second place spot in the Big East Red Division.

"It was an excellent performance on the road tonight," Syracuse head coach Ian McIntyre said in a release. "Whenever you go on the road in the Big East and pick up a win, you show a true resilience and toughness. We showed that across the board and were able to win in a tough environment.”

A top five finish in their division – and a spot in the Big East tournament that comes with it – are definitely within reach for the Orangemen now with three Big East matchups remaining.

Despite facing some early season struggles, #21 Louisville looks to be getting stronger as postseason approaches, as evidenced by a 1-0 home over St. John’s this weekend.

“It was another very good Big East win,” Louisville head coach Ken Lolla said after the game. “To get three points against St. John’s, who is a very good team, they’re having another great season, from an RPI perspective it was very good.”

No halting the Big Red

Even into the Ivy League season, no one has been able to halt #24 Cornell.

The Big Red continued to scythe through opposition in the Ivy League, defeating Yale by a 3-0 score line. The win extended Cornell’s overall winning streak to 12 on the season, as they remain the last Division 1 men’s side yet to tie or lose a game.

However, Cornell isn’t getting carried away, as this is familiar territory – they started strong in the Ivy League, only to fade away from contention.

“In the Ivies we were 3-0 last year, and we finished with a loss and three ties,” forward Tyler Regan said in a press release. “So we don't think we've accomplished anything. … We've got to keep it going, and we're not happy with 3-0 because we've been here before and had a let-up.”