Box Score ALBUQUERQUE, N.M. --- Fans at the UNM Soccer Complex could be heard cheering "We want Omar!" with the Lobos down 2-0 early in the first half against (RV) Old Dominion on Saturday night, and freshman Omar Greydelivered just 1:15 after entering the game to cut the deficit to one. The goal marked the only one scored by the Lobos however, as UNM fell by a 2-1 final in its Conference USA opener. Grey's goal marked his fifth of the season to tie him for fifth all-time in UNM freshman scoring and was also his fourth goal in the last four games. Freshman Alex Fetterly got his first career start between the posts on Saturday night collecting six saves in 90 minutes.  With the loss, UNM drops to 2-5-0, 0-1-0 C-USA while defending 2017 Conference USA Tournament Champion (RV) Old Dominion improves to 4-1-1, 2-0-0 C-USA. "I think that as a group we just haven't had that punch for 90 minutes. On one hand, it's incredibly frustrating, but we have these incredible moments - and it's exciting that this team can keep getting better, these young guys can keep getting better," head coach Jeremy Fishbein said. "This is a good group and I believe in this team." The Lobos got caught sleeping just 1:51 into the match when ODU's Max Wilschrey took the first shot of the night, finding the back of the net for his seventh goal of the season. The ball was batted around the top of the box and he chipped it quickly over the defense and into the top of the net for the early 1-0 lead.  The Lobos had a chance at the 17:22 minute mark when redshirt-junior Tom Smart sent a swift pass to senior Antoine Vial in the box. Vial's header looked good, but ODU's Mertcan Akar made the save to keep it 1-0. ODU went up by two just two minutes later when Wilschrey tallied his eighth goal of he season. Fetterly came out of the box to make the stop, but Wilschrey slid by and found the net for the 2-0 lead.   "Fetterly made a daring decision to come out on that second goal and missed it, but outside of that he had a fantastic game," Fishbein said.  UNM decreased the deficit to one when Grey, in the game for just over one minute, took a long pass from Smart on the left side, moved past the defense and went one-on-one with Monarch keeper Akar, sending a low kick into the keeper that worked its way behind and into the bottom of the net. 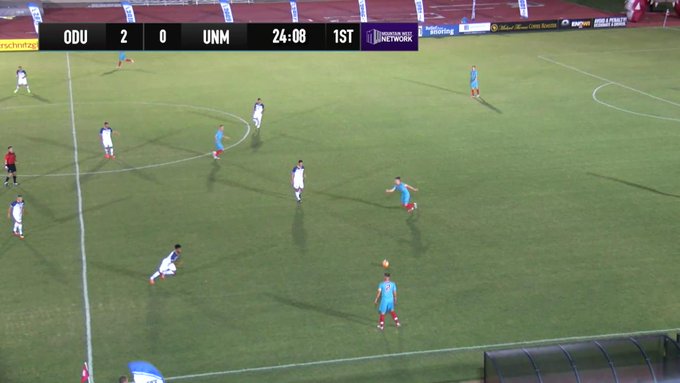 The goal was the last of the night as neither team was able to find the back of the net for the remaining 66 minutes of the match. Overall UNM was outshot 13-10 including a 9-5 margin in shots on goal.  Vial led the Lobos with three shots, two on goal and Grey also posted three, one on goal, while sophomore Nick Taylor shot twice, once on goal. Senior Matt Dorsey and redshirt-sophomore Billy Jones each added one more. New Mexico did hold the advantage in corner kicks 5-4 and committed just five fouls compared to 13 for Old Dominion. The Lobos have a bye week and are back in action on Saturday, Sept. 22 as they travel for their first road contest of the conference season at Florida Atlantic at 5 p.m. MT.