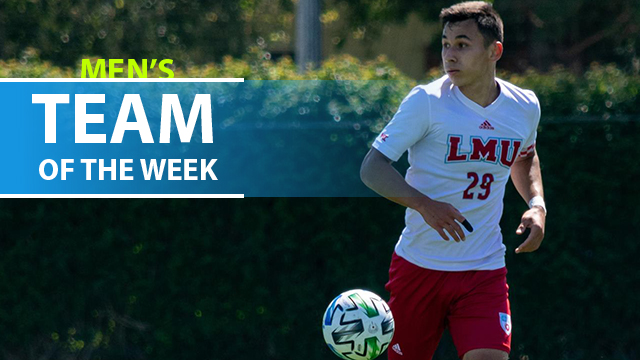 In a clash the settled the WCC regular season title and automatic bid, Noel Caliskan stepped up when it counted the most.

The sophomore from Germany has been excellent since joining Loyola Marymount in the fall of 2019. With his side tied at 1-1 heading into the final minutes of Sunday’s clash with St. Mary’s, Caliskan popped up to score two goals in the last two minutes of the game to secure a huge 3-1 win.

With the win, LMU clinched a trip to North Carolina and the overall WCC crown. Check out some of the other top performances from the past week of action in men’s Division I soccer.

GK Eoin Gawronski, Temple – An eight-save effort from the redshirt freshman helped Temple secure a season-sweep of SMU. His side hung on to a 2-1 win on the road in North Texas and will look to make further inroads at the AAC tournament.

D Melker Anshelm, James Madison – The Dukes won the decisive matchup over the weekend against UNC Wilmington. Anshelm headed home the first and eventual winner, while also playing the full 90 minutes and helping his side get the clean sheet in a 2-0 victory.

D Mujeeb Murana, Saint Louis – Murana had an excellent game at right back in SLU’s 4-0 win against Duquesne. He scored the first goal and also was credited with an assist in the triumph.

D Mark Salas, North Carolina – A 90-minute shift against Duke helped UNC blank their close rivals by a 1-0 score. Salas and the Tar Heel defense limited the Blue Devils to just four shots on the night.

M AJ Chastonay, Belmont – It was one of the best games of Chastonay’s young career so far, as he helped Belmont upset Furman in the Southern Conference tournament semifinal. The freshman scored a goal and had an assist in the 3-1 victory.

M Paolo Gratton, Wisconsin-Milwaukee – A sensational season for the Wisconsin native continued last week. After scoring in the regular season finale against Robert Morris on April 5, Gratton bagged the winning goal in the conference tournament semifinal on Sunday against UIC. He has 10 goals in 11 games this season.

M Noel Caliskan, Loyola Marymount – While he may not get on the score sheet often, Caliskan is such a key player for the WCC side, helping them control games in the middle of the park.

M Angel Bacho, UNC Greensboro – Bacho’s second half goal provided the winning margin in the SoCon semifinals, as UNCG held on for a 2-1 win against East Tennessee State.

F David Bercedo, Quinnipiac – The Spanish sophomore helped Quinnipiac to a trio of wins this past week, cramming three games into six days. On Monday, he scored and assisted in a 5-3 win over Iona. After playing big minutes in a 2-0 regular season finale against Manhattan, Bercedo scored the winner in Sunday’s MAAC tournament quarterfinal.

F Alexander Dexter, Pittsburgh – It was a rout in the season final for Pitt, which defeated Virginia by a 5-0 score on Thursday. Dexter got everything going with the opening goal, chipping in two assists as the game wore on.