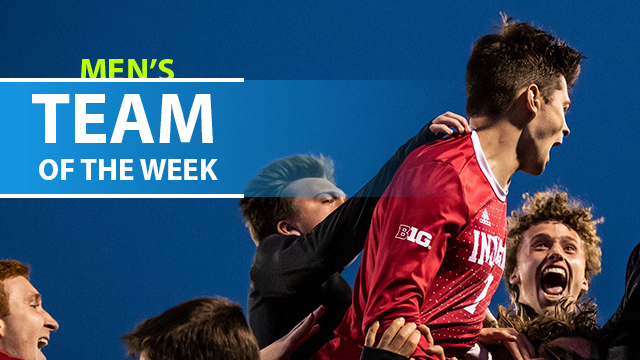 If Indiana is to make a deep run in the spring NCAA tournament, they’ll need Victor Bezerra to maintain his torrid scoring path.

Once again boasting one of the top defenses in the nation, Bezerra has been the spearhead of the Hoosier attack. He led Indiana to another Big Ten tournament title, as the Hoosiers best Penn State in a penalty shootout over the weekend.

Bezerra bagged a brace earlier in the week, leading IU to a 2-0 win over Maryland. He also scored the lone goal of the game against the Nittany Lions in a match that ended in a 1-1 draw.

Check out some of the other top performances from the past week of action in Division I men’s soccer.

D Matt Sloan, Fordham – The senior scored in each of Fordham’s Atlantic 10 tournament matches, a 2-1 win against Saint Louis in the semifinal and a 2-0 win in the final against George Washington.

M Quinn Matulis, Air Force – It was a big week for the Air Force program, which navigated through a tricky path to nab the WAC automatic bid. Matulis had assists against San Jose State and UTRGV, then saved his best for last with a goal and assist in the final versus Grand Canyon.

M Axel Ahlander, James Madison – The freshman scored JMU’s lone goal from two games last week. He tallied in a 1-1 draw against Drexel, as the Dukes went on to win that on penalties. He then followed that up by helping his side keep a clean sheet on Saturday against Hofstra, another shootout victory in the CAA tournament.

M Mattias Almeida Sundell, Seton Hall – A mammoth performance from Sundell helped Seton Hall hoist the Big East tournament crown. He scored a goal and had two assists in a semifinal win against Marquette, before notching an assist in Saturday’s final against Georgetown.

F Julian Gomez, Monmouth – Returning to the NCAA tournament for the first time since 2014, Monmouth beat the No. 2 and No. 1 seeds in the MAAC knockout tourney to capture the crown. Gomez played a huge part in delivering the Hawks, as he scored the decisive goals in both wins for Monmouth.

F David Coly, American – A remarkable story in his own right, Coly was named Patriot League Tournament MVP. He scored the opening goal in the championship game, and the winning goal in the semifinals against Loyola (MD).

F Victor Bezerra, Indiana – Bezerra isn’t quite the nation’s leading scorer, but 11 goals from 11 games isn’t too shabby. If he keeps this up over the coming week, IU has a shot for a ninth star.

F Zach Ryan, Stanford – In a Pac-12 decider, Ryan came up with the clutch goal as Stanford edged Washington by a 1-0 score in overtime.