Marquette has started conference play with a 4-0 record. Sophomore striker C. Nortey has all four game-winners. 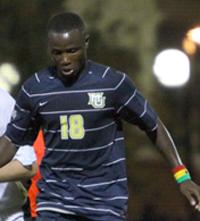 The Ghanaian struck the winning tallies against Butler and Creighton last week to help the Golden Eagles improve to 8-3-0 on the season. The unstoppable striker earned the honor as the TDS Player of the Week for his remarkable run of form recently.

Check out Nortey and the rest of the TDS Team of the Week below.

GK: Winston Boldt, Army – Boldt recorded a pair of shutout victories over the week with 1-0 wins over Colgate and Loyola (MD). He had five saves in both games for Army, which is a remarkably 9-1-1 on the season and top of the Patriot league with a 4-0-0 conference record.

D: Paul Dillon, Marquette – Dillon provided three assists in two games for Marquette, which knocked off a pair of ranked opponents last week. Dillon logged the lone assist in the Golden Eagles 1-0 win over Creighton. He leads the squad with six helpers this year.

D: Joseph Greenspan, Navy – The defender was instrumental for Navy in a pair of shutout victories over the week. Greenspan scored the game-winner against American in a 1-0 victory. He notched his fourth goal of the season when he converted a penalty kick in a 3-0 win over Colgate.

D AJ Cochran, Wisconsin – Cochran scored two goals in Wisconsin’s thrilling 4-3 win over Indiana to extend the Badgers home winning streak to nine games. The center back claimed the game-winner before disrobing in the supporter’s group – bonus points given for celebration.

D Patrick Foss, Virginia – Foss netted the last goal in the 3-3 draw against Maryland. He also played a grand total of 220 minutes last week between the two overtime games. The irreplaceable defender has adjusted well to the collegiate level.

M Ignacio Maganto, Iona College – Maganto netted a hat trick for Iona(m) in a 3-1 win over Rider on Saturday.  The junior midfielder leads the team in scoring with five goals this season.

F Edwin Moalosi, South Florida – The forward helped spark the Bulls offense against Cincinnati with two goals and an assist in a 4-1 for South Florida.

F Joey Tinnion, Oakland – Scored two goals in two games with the lone goal in a 1-1 double overtime draw against Denver and then the game-winner against Wright State.

F Leobardo Vazquez, SMU – Vazquez scored a hat trick against Cincinnati in 46 minutes of play to the Mustangs to a 3-1 win in conference play.

F Patrick Mullins, Maryland – Mullins scored twice and added an assist in a wild 3-3 draw against Virginia. He also scored the lone goal for the Terps in a 1-1 draw against Notre Dame.