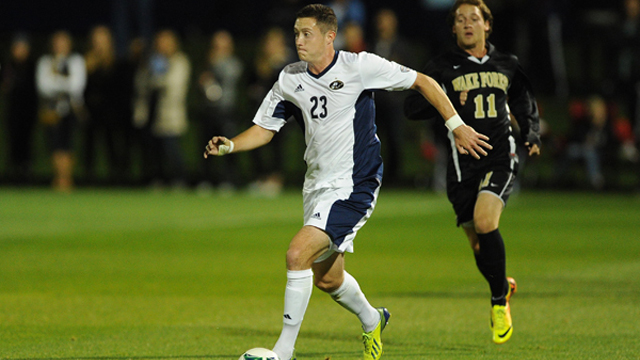 Thanks to a two-goal performance on Wednesday, Akron’s Robbie Derschang claimed this week’s honor as TDS Player of the Week. The senior midfielder scored both of Akron’s goals against Michigan on the road in the 2-1 win as the Zips improved to 12-3-1.

GK Kees Heemskerk, College of Charleston – Played a huge role in a pair of wins over the weekend that kept College of Charleston in the playoff hunt. Heemskerk had six saves in a 2-1 victory over James Madison on Wednesday. He had five saves on Saturday in a 1-0 win over Northeastern. After missing a large portion of the season with a spinal fracture, Heemskerk has returned to his normal, high-level of play in goal for the Cougars.

D Alex Herrera, George Mason – The senior defender scored on Friday in a 2-1 win over Rhode Island that helped kick off a good weekend for Mason. Herrera was also a key part of the 2-0 win over George Washington on Sunday that kept the unbeaten run in conference play alive.

D Josh Beard, UIC – Beard scored the game-winner against Oakland to clinch the Horizon League regular season title for the Flames. He was also a key piece of the shutout in the game. Beard also played all 90 minutes on Sunday in a 3-1 win over Drake.

D Boyd Okwuonu, North Carolina – One of seven players on North Carolina who played all 90 minutes in a crucial 1-0 win over Virginia on Friday. Okwuonu limited the Virginia attack to only one shot on goal, as he led the defensive effort against a strong, speedy attack.

M Robbie Derschang, Akron – The senior Zips midfielder had both goals in a 2-1 win over Michigan during the midweek out-of-conference game. Derschang has three goals and an assist in his last two games.

M Michael Calderon, New Mexico – Calderon converted a penalty kick with seven seconds left to give New Mexico a 4-3 win over UAB on Friday. He stepped up again on Sunday to knock home his second penalty kick of the weekend in a 3-0 win over Old Dominion.

M Franklin Castellanos, Iona College – The senior midfielder notched the game-winner against Saint Peter's and then claimed his first two-goal performance of his college career against Canisius. Castellanos scored the first and third goal in a 3-1 win for Iona.

F Robbie Kristo, Saint Louis – Kristo had four goals in two games for the Billikens, which lost 3-2 to Louisville and beat Saint Joseph's 4-1. The junior forward has eight goals on the season for the Atlantic-10 side.

F C. Nortey, Marquette – Another week, another game-winner for redshirt sophomore C. Nortey. The striker scored a delightful against Seton Hall in Marquette’s lone game from the past week. It was the fifth game-winner of the season for Nortey – all of them in Big East play.

F Tyler Riggs, Kentucky – Riggs had a hat trick on Sunday in a 6-1 smashing of FAU. It was a fitting cap on Senior Day for the Wildcats forward who has 28 career goals. Riggs also scored during the midweek win over Marshall.