Men’s Team of the Week: December 4 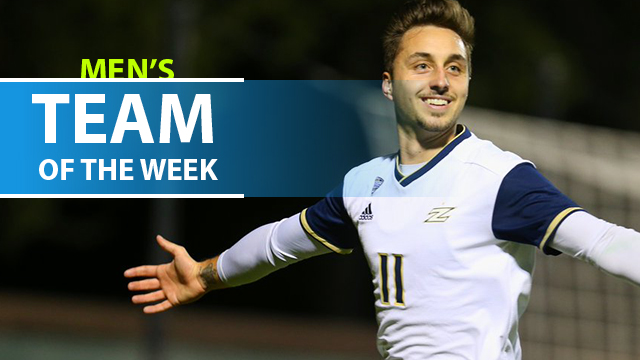 For the second time in the postseason, Marcel Zajac stepped up in a huge way for the Akron Zips.

Looking to finally snap Stanford’s stranglehold on the NCAA tournament, Zajac’s two goals and one assist ensure that the Zips find a way to beat the Cardinal on Palo Alto.

Zajac’s opening tally was easily the finest of the evening, curling an effort off both posts to open the scoring in the first half. He worked a nice combination with Ezana Kahsay to give Akron a 2-0 lead. After Stanford stormed back in the second half, tying the game 2-2. Once again, Zajac helped find a way, showing great awareness to head a cross

Below is a look at some of the other top performances, highlighting the final college Team of the Week for the 2018 campaign.

Team of the Week: November 26-December 2

GK Trey Muse, Indiana – While Muse didn’t have the busiest day in goal on Friday, he stepped up in a big way when called upon. He made a few saves with the game tied at 0-0, and now has three shutouts in three NCAA tournament games.

D Donovan Pines, Maryland – Another standout performance from Pines and the Maryland back line kept JJ Williams and Kalil Elmedkhar quiet through 90 minutes, securing Maryland’s spot in the College Cup.

D Connor Corrigan, Michigan State – Injuries have plagued the senior left back for long stretches of this season, but he delivered in a huge way in Saturday’s 2-1 win against James Madison. Corrigan battled through tough conditions, and setup Ryan Sierakowski for the game winner.

D Andrew Gutman, Indiana – Once again, Gutman found a way to influence an Indiana result. Along with another lockdown defensively display, he created the lone IU goal with a burst forward and perfect cross to Austin Panchot.

M Colin Biros, Akron – While playing just 35 minutes, Biros got himself at the right place at the right time in the second half, heading home from Zajac to provide a famous win for the Zips.

M Amar Sejdic, Maryland – Like Pines, Sejdic’s stepped up in a big way at the tail end of the season. He setup Sebastian Elney on the game-winning goal in the first half, once again finding a way to keep Maryland’s season alive.

M Austin Panchot, Indiana – After glancing home the winning goal, Panchot now has game-winning goals in back-to-back games, and a reminder of just how deep Indiana is behind their impressive senior class.

M Andrew Samuels, Maryland – One of Maryland’s unsung heroes during the current run, Samuels shields the Terp back line and was in the mix once again as Maryland blanked the high-powered Kentucky offense.

F Marcel Zajac, Akron – At the start of postseason play and the Mid-American Conference tournament, Zajac had two goals. Seven games later and prepping for a return to the College Cup, Zajac now has 10 in 2018, scoring eight during that stretch in all but one game. While it’s more than a one-player game, Zajac’s finishing touch has made all the difference for Akron.

F Ryan Sierakowski, Michigan State – Just when it looked like James Madison was set to win another game on the road, Sierakowski bagged a brace, scoring twice over 10 minutes to

F Ezana Kahsay, Akron – It was only a 40-minute bench shift from Kahsay, but it was crucial nevertheless. He played a very impressive one-two with Zajac on Akron’s second goal and hung tough with Stanford’s physical defenders.